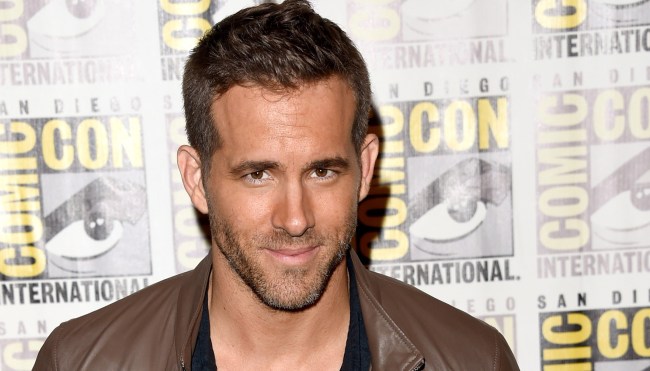 Celebrities love to own or be the face of liquor companies, and who could blame them. Drake has Virginia Black Whiskey, Diddy has Ciroc, Connor McGregor has Notorious Irish Whiskey, Channing Tatum has Born and Bred Vodka, Justin Timberlake has Sauza 901 Tequila, Matthew McConaughey has Wild Turkey Bourbon, Dan Akroyd has Crystal Head Vodka, Kenny Chesney has Blue Chair Bay Rum, and George Clooney had Casamigos Tequila before selling the company to Diageo for $1 billion. The latest celebrity to have his own alcohol company is Ryan Reynolds.

The Deadpool star acquired Aviation Gin this week. “If you think all gin tastes are the same, you’d be mistaken. Aviation is in a completely different league and I couldn’t be prouder to be a part of the company,” Reynolds said after taking ownership of Aviation Gin. Reynolds allegedly became interested in purchasing the company after tasting the spirit. “About a year ago, I tried Aviation for the first time,” Reynolds said. “Since that day, I’ve spent my time finding some way to infiltrate the company.” Reynolds boasts that Aviation is “the best damn gin on the planet.” The Hollywood star added that the gin is “smooth” and has a “botanical” taste.

Reynolds announced his new company on Twitter with the caption: “In the long and in no way disastrous marriage of showbiz and alcohol, so happy to announce I’m the proud owner of a gin company.” And Aviation Gin responded by saying: “We’re excited to announce our new boss, @vancityreynolds. Actor, producer, professional good-looking person.”

In the long and in no way disastrous marriage of showbiz and alcohol, so happy to announce I’m the proud owner of a gin company… @AviationGin. pic.twitter.com/qPwe0IC6bz

Thank you for your email and interest in Aviation American Gin! I’m away from my desk at the moment but will respond the moment they give me a desk.

About a year ago, I tried Aviation for the first time. Since that day, I’ve spent my time finding some way to infiltrate the company. I did this for one simple reason: It’s the best damn gin on the planet. Period. My responsibilities here at the company are vast. I’ll spend my days being photographed intermittently clinching my jaw muscles while pointing at things and nodding. I’ll drink Aviation Gin. I’ll sit in board meetings, imagining my very own Red Wedding. I don’t know whose idea it was to allow me into the gin business, but I can assure you, there are smarter, more reasonable people in charge.

Thank you again for your email… If the matter is urgent, please contact my secretary, Bruce, who’ll respond the moment I get a secretary named, Bruce.

“We couldn’t be happier that Ryan discovered Aviation. He wholeheartedly embodies the authentic, original spirit of Aviation Gin,” Andrew T. Chrisomalis, CEO of Davos Brands, said in a press release. “Ryan has worked tirelessly to create some of the world’s most iconic media properties and will bring that drive and creativity to sharing Aviation with the world.” The statement didn’t reveal how much the actor spent to buy the alcohol business but did say that Reynolds will “play an active role in the day-to-day business and oversee creative direction.” Not sure how great gin goes with chimichangas.