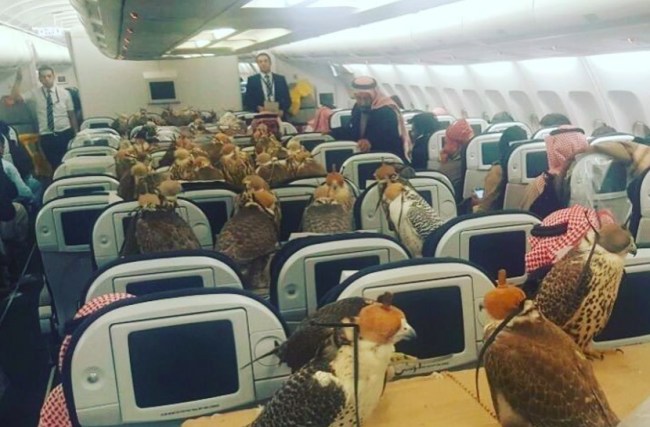 Awesome pic here from Reddit, where a users says that his captain friend took a pic of a plane booked with 80 falcons. Falconing is a pretty popular hobby in Saudi Arabia and other Arabic countries, so airlines operating in the Middle East rules about how the birds can be properly transported. For example…

Another Reddit thread from four years ago has some interesting facts about falcon-travel, including how a falcon passport is a real damn thing.

For those wondering, this is probably one of the gulf states royal families going hunting. Stuff like this is common to a lesser degree in the Gulf on regular flights. If you fly Etihad or Emirates or Qatar enough you will eventually see someone flying in first class with a falcon sitting next to them. They have their own passports so they can travel for hunting and there are special laws in the gulf states to prevent discrimination against falcons (seriously). In the UAE, it’s actually illegal to deny a falcon and it’s owner basic accommodation. So if a falconer comes into Starbucks and requests a chair for his falcon, you have to give it to him and let the falcon sit there in the store.

So why not just charter a plane to fly your falcons around private? Why buy all those airline tickets? Reddit has answers for that too…

I think I’d watch the hell out of a movie about falcons on a plane.

My captain friend sent me this photo. Saudi prince bought ticket for his 80 hawks. from funny