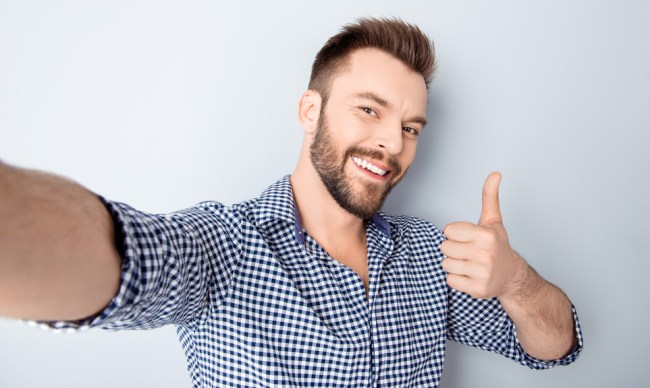 No, dude. Thumbs down to selfies. At least that’s what a recent study says people think about them.

Turns out, shocker, most people don’t give a rat’s ass about your stupid selfie and in fact, many actually hate it.

In a ridiculously thorough study on selfies by some researchers at Ludwig-Maximilians-University Munich, 238 people were surveyed for their thoughts on the selfie scourge.

Here are some highlights…

Altogether, participants expressed a distanced attitude toward selfies, with stronger agreement for potential negative consequences (threats to self-esteem, illusionary world) than for positive consequences (e.g., relatedness, independence), and a clear preference (82%) for viewing more usual pictures instead of selfies in social media. The revealed selfie-bias, i.e., the systematic discrepancy between judgments on own versus others’ selfies, and the reported critical attitude toward selfies allows multiple interpretations. Taking peoples’ statements literally, selfies should have never become as popular as they actually are.

Did you read that last part? “Selfies should have never become as popular as they actually are.” No…shit.

Own selfies were rated as more self-ironic and thought of as more authentic than those of others. In contrast, others were assumed to use selfies for self-presentation and have fun while taking selfies to a higher degree than oneself. A further analysis of the ratios of agreement (i.e., number of 4 or 5 ratings) showed the discrepancy between own versus other statements in more detail. For example, 40% claimed self-irony for their own selfies, but only 13% perceived self-irony in others’ selfies. In contrast, 90% declared others’ selfies as means of self-presentation, but only 46% attested this to own selfies. Obviously, there is a systematic discrepancy in the perception between own versus others’ selfies, i.e., a selfie bias.

Let me break that down for you. 90% of people thought other people’s selfies were for self-promotion, while 46% believed this to be true of their own selfies. In other words, 54% of the respondents are delusional.

Amazing. Who would have ever thought that narcissism would ever be a turnoff to others?

Now do us all a favor and be a part of the solution and share this with all of your annoying selfie-taking friends. I know it’s not as important as say the mess in Washington, but at least it will make some of us feel a little bit better in our daily lives.