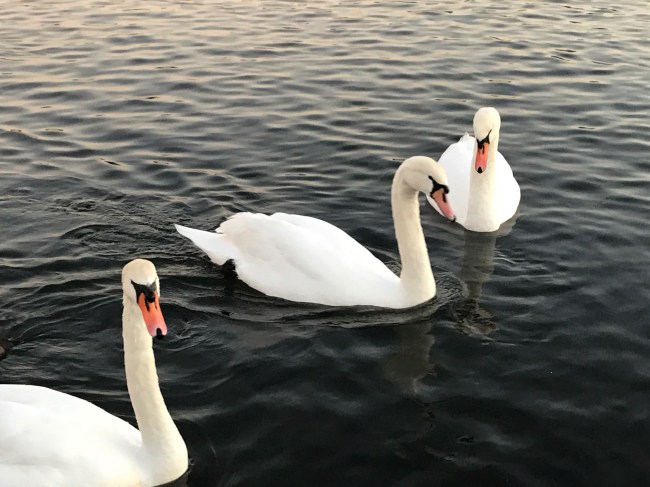 There’s been a murder in the British countryside, two murders, in fact. Someone is shooting the Queen of England’s royal swans with a high-powered rifle, firing what investigators describe as steel ball bearings the size of marbles at the swans.

These are her majesty’s personal swans, each affixed with a ceremonial ring around their legs to indicate their royal status, but that’s not stopping someone from gunning down the swans.

In total, there were 12 swans shot with the high-powered rifle. Some of the swans were left permanently blind, others with irreparably shattered beaks. Make no mistake of it, some sinister mother fucker is out there trying to kill all the Queen’s swans.

According to ancient English tradition, her Majesty actually owns ALL of the swans in England. I didn’t now this until today, and I can’t imagine how many swans there are in England. I was actually in London just a few weeks ago and witnessed this bevy of swans swarming people feeding them in Hyde Park, just off Kensington Palace:

According to the New York Post, local residents have formed a community watch/patrol group to try and catch the swan murderers in the act. And, if that isn’t the most British thing you’ve ever heard then I don’t know what can possibly top that.

A representative from Swan Support (that’s a thing) said she has ‘no words’ to describe these horrific murders, and she thinks her Majesty will ‘be horrified’ to hear of her prized swans being shot and mutilated with a high-powered rifle shooting ball bearings.

This isn’t the first time there has been a rash of swan murders, though. Back in 2011, SEVEN SWANS were shot and murdered out in the countryside.

I have to ask, is nothing sacred anymore???