STOP EVERYTHING: Australia Says It May Have Found Wreckage From Missing Malaysian Airlines Flight 370 In The Indian Ocean

Australian Prime Minister Tony Abbott  says Australia may have found imagery related to a Malaysian Airlines Flight 370, the jetliner missing for 11 days with 239 people on board. Breaking, via the SCMP:

“New and credible information has come to light in relation to the search … in the south Indian Ocean,” Abbott told parliament. “The Australian Maritime Safety Authority (AMSA) has received information based on satellite imagery of objects possibly related to the search.”

Abbott said aircraft were en route to the area where the objects were found. The AMSA said it would hold a media briefing in Canberra at 0430 GMT (12.30pm HKT).

Abbott said he had already spoken with his Malaysian counterpart Najib Razak and cautioned that the objects had yet to be identified.

“The task of locating these objects will be extremely difficult and it may turn out they are not related to the search for MH370,” Abbott said.

Investigators believe that someone with detailed knowledge of both the Boeing 777-200ER and commercial aviation navigation switched off the plane’s communications systems before diverting it thousands of miles off its scheduled course from Kuala Lumpur to Beijing. 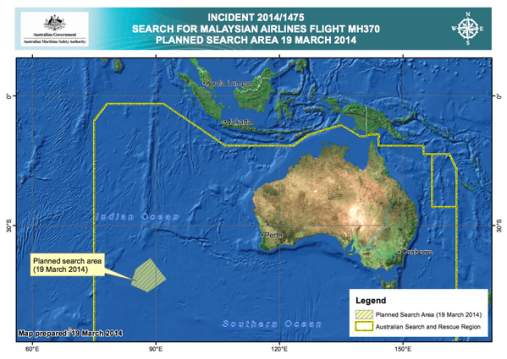