If only the principal or other administrators and teachers at Holmes Park Elementary in Sapulpa, OK had any warning signs that Megan Sloan might be a massive drug addict… If any possible red flag was apparent — ANYTHING — then they could have prevented her from bringing meth, heroin and 40 syringes into her second grade classroom. But alas, there were no warning signs. Just look at her mug shot. It is the face of innocence. 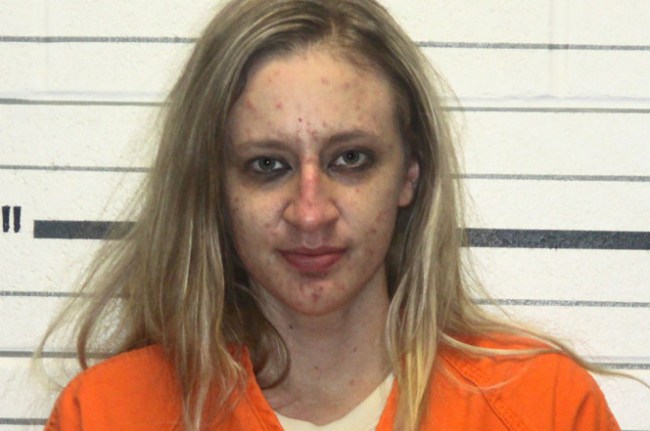 Oh yeah. Nothing to see here. Just a 27-year-old with crippling, hemorrhoid-sized adult acne on her face. Totally normal. For all we know, she much just be hunting buddies with Dick Cheney.

Now, I suppose it is possible that Sloan was able to cover her face with makeup while at school, but considering that she lives on a teacher’s salary and she “admitted stealing two iPads from the school and taking field trip money to buy drugs” I would guess that she probably couldn’t afford the makeup regimen required to cover up that mess.

To throw another log on the “how the fuck did no one realize what was going on fire,” according to the NY Post, “Sloan’s appearance in her mugshot following her arrest shows a starkly different image than earlier photos posted on her Facebook page. The pretty blonde is seen in several photos with young children, some posted as recently as last month. Sloan started working at Sapulpa Public Schools in July 2014, according to her profile.”

Good job, people in charge at that school. Way to be totally oblivious.