Bro’s Story About Breaking Bones, Getting Shot With Tear Gas And Robbed Is A Great Reason To Never Visit Paris 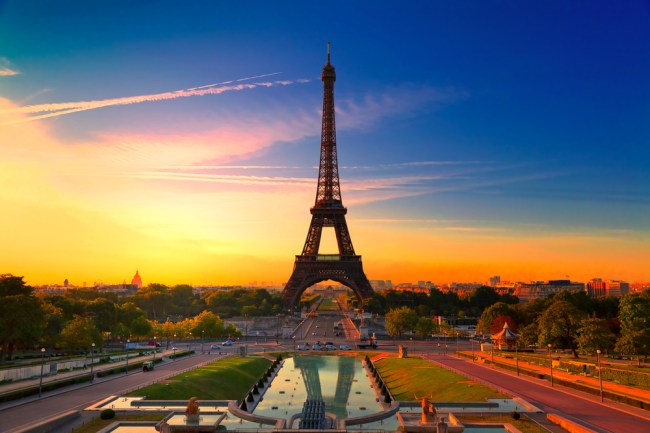 This story actually takes place last Summer during Euro Cup 2016 but this bro is just getting around to telling his tale now. It’s a story that involved a shattered knee cap, broken nose, multiple robbers, and getting shot with tear gas. We’ve got a classic tale here of how things can go South in a hurry when you rub elbows with riff raff and miscreants.

This story starts off with a bro and his girlfriend arriving in Paris and smoking some hash to kick off a month-long backpacking trip through Europe and things go about as poorly as they possibly could on Night 1 (via TIFU):

BACKGROUND: My girlfriend (who we’ll call Emily) and I were in Paris on the very first day of a month long backpacking trip in Europe. We spent the whole morning smoking hash at Sacré-Coeur with some new friends, who told us that the Euro 2016 final between France and Portugal was that night. They told us to meet them to watch the game at the ‘fan zone’ at the Eiffel Tower but urged us not to be late, otherwise we wouldn’t get into the ‘fan zone.’
Being jet-lagged and burnt out from the hash, we took a nap before heading down, but overslept by an hour. We figured we’d head down to the Eiffel Tower anyway and see what was going on. whoops.
THE FUCK UP: Arriving at the Eiffel Tower we realize there isn’t any fanzone to be found, or so we think. It turns out we are in the completely wrong place on the opposite side of the tower from the fan zone, and amongst a crowd of mostly troublemakers that is about to erupt into a riot.
The first signs of chaos are a small group of youths antagonizing police underneath the tower, and when we see a massive line of riot police facing in our general direction, we decide it’s time to leave. As we make our way through the crowd I hear screaming and look up in horror to see a smoking projectile sailing through the sky, headed right for us. The crowd around us scatters, knocking Emily and I down, where a tear gas canister blows up mere feet from our faces.
“Get up! We have to go!” I’m screaming at Emily but I notice she’s crying & screaming out in pain, not from the tear gas in our eyes but from the fact that her knee is so broken the thing might as well be on Mars. I throw her over my shoulder and go sprinting through clouds of tear gas out of the chaos and onto the Pont d’Iena bridge, where some guy snatches Emily’s phone out of her hand. I turn and watch helplessly as the guy runs off into the crowd, Emily screaming “he took my phone!”
“Fuck the phone!” I run as far as my arms/legs allow and then set her down. I need to get her to an ambulance, but I can’t leave her to find one, so I need someone to help me. So I start screaming at the crowd around me for someone to help, forgetting that I am amongst almost nothing but riff-raff of the worst variety. Nobody helps me or seems to give a shit, so I pick her up and run as far as I can and set her down again. A crowd gathers ogling my girlfriend’s knee and staring at me blankly as I shout shit they don’t understand like “911! AMBULANCE!”
It’s then I am disgusted to notice a hand reaching from Emily’s purse to my back pocket, and I slap it away forcefully, standing up from a crouching position as I do so, screaming “FUCK OUT OF HERE!” I look into the eyes of the perpetrator, a young African guy who loads up and punches me in the face, shattering my nose. As blood spurts out of my nose I look at the guy and say with genuine bewilderment “are you fucking kidding me?” He looks at me blankly like he is genuinely surprised to see me still on my feet and spitting profanity at him. I scoop up my girlfriend and start running for our lives.
I’m now running on what I am convinced is just an infinite bridge of hell on earth. Brawls rage around us as my knees are starting to buckle, my vision blurring. I’m bleeding out of my head onto my girlfriend’s lap who is screaming in agony from being carried around with a dislocated knee. I am pretty sure we are going to die.
Suddenly I’m joined by our savior, a very large goofy looking fellow, who begins helping me carry Emily and encouraging us in French or some other language which we didn’t speak. It occurs to me that he could be trying to steal from us too, but at this point I don’t even care. Our new friend’s intentions turn out to be true, as he and his group of friends helped me carry my girlfriend to relative safety and helped me guard her while they got help. (For a while I couldn’t tell this part of the story without getting extremely emotional about this guy and his friends who stepped up to help us when everyone else was trying to take advantage of our situation. I’ll never forget him.)
A bunch of paramedics pulled up in a station wagon, urging me to stay calm while they waited for an ambulance. As police pushed rioters further down the bridge in our direction, I begged the paramedics to just get us out of there in the car. With fear in their eyes and the situation escalating they finally relented, carefully placing Emily in the backseat while I jumped in the trunk.
They got us to a safe part of the city and asked us for our ID. It’s then we realized that, as if we weren’t having a bad day already, our passports had been stolen.
We ended up at a hospital outside Paris, where they did a great job re-setting my girlfriend’s knee and didn’t touch my nose which was fine with me. It’s still crooked. Luckily we were able to get emergency passports and continue on the rest of our trip which was absolutely amazing. I still smell tear gas sometimes when I see Eiffel Tower pictures & trinkets. Good times!
tl;dr (again): Was late to the Eiffel tower to watch Euro 2016 finals, ended up in a riot, got tear gassed, girlfriend’s knee broken, her phone stolen, my nose broken, and our passports stolen.

Here’s a look at what those EURO2016 Eiffel Tower hooligan riots looked like:

I’ve never been to Paris in my life, so it’s unfair of me to implore you bros to stay far as fuck away from one of the most beloved cities on the planet. I have been to Nice/Antibes/Cannes for the Cannes Film Festival a few years back and it was one of the best trips of my life (thanks again for the free trip, Stella Artois!). So I don’t think you should let this bro’s nightmarish story dissuade you from visiting Paris, but I do think you should send this story to any friends you have that are planning on visiting Paris in the near future just to fuck with them because that’s what best friends do.