10 Things Guys Should Know When Traveling to Nashville 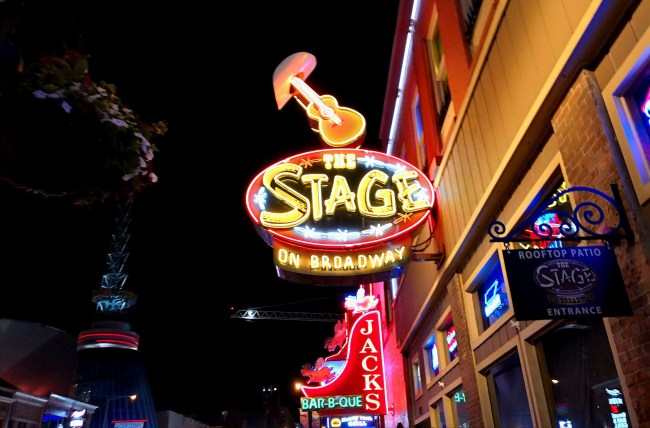 1. If you’ve never been to Nashville, you might wonder what the appeal is to go there. Just know that there’s a reason it’s called NashVegas. It’s a destination for travelers in the South and Midwest because it’s easy to get to and has a lot to offer. The good thing about a place like that is the people you meet are carefree and the girls are more likely to sow their wild oats. That’s what makes it like Las Vegas.

The beauty of Nashville is that you can go there at any time of the year. While it’s nicer when it’s warm outside (what city can’t you say that about?), most of its positives aren’t dependent on the weather. You’re not going to the beach or lying out by the pool while you’re in town. That ain’t what Nashville is about. It’s about the good Southern food, the fun bars, the country music, and some other shit you get wrapped up in along the way. The good thing is that it never gets THAT cold. The lowest temperatures during the day in the winter are the high 40s. That’s what makes it appealing to those looking for a fun city that isn’t necessarily a beach destination.

2. It’s easy to get around Nashville, but you’d expect that in a major city. Midtown is a cool neighborhood to hang in, but you’ll want to stay downtown because it will make the whole experience much easier. There are plenty of hotels downtown, including the chains you know like Best Western, Holiday Inn Express, Renaissance, and Sheraton. As long as the hotel has a decent reputation on Trip Advisor, you’re going to be fine. You can deal with a hotel in Midtown in you have to, but just don’t get stuck staying at a hotel near the Grand Ole Oprey. Look at where that shit is on a map. It’s not close to anywhere you want to be.

3. Nashville is an underrated sports town so focusing your weekend around one of the local sporting events isn’t a bad idea. The Titans are the main attraction even though they haven’t been good in the last couple of years. The experience at a Predators game is one of the most positively surprising atmospheres in the NHL. You wouldn’t expect a hockey crowd that rambunctious in the South, but it’s there. Vanderbilt shouldn’t be at the top of your list for SEC football destinations, but it’s a nice byproduct if they’re playing someone good in football. The real Vanderbilt experience comes in basketball with the raised court and a team that’s generally more competitive than what the football team provides.

4. Because we’re all alcoholics, things like breweries and distilleries usually top the list of things to do when bros travel. Therefore it’s worth noting that the Jack Daniels distillery is only one-and-a-half hours away in Lynchburg. The weird thing about the Jack Daniels tour is that you can’t actually taste the whiskey while you’re on the tour because Lynchburg is a dry town. Still, if you’re a big fan of their product, it’s cool to see the process of how the whiskey gets made. Tennessee isn’t known for its beer, but you can also visit a cool brewery while you’re in town. Yazoo Brewing Company is much easier to get to than the Jack Daniels distillery and actually provides you with free samples. It’s pretty cheap at $6.50 and you get about three pints of beer and a pint glass as part of the tour. It’s a young brewery, but you get the same kind of experience you’d get at a Samuel Adams brewery tour.

5. I highly suggest checking out the Nashville Pedal Tavern while you’re in town, which is a unique and fun way to do a bar crawl. The Pedal Tavern can hold up to 16 people, but you can make it work with as few as eight. (You’re going to need some man power to get that thing moving.) Plus if you don’t fill the whole thing at first, you can pick people (aka GIRLS) up along the way at the bars and have them join you. Pedal Taverns exist in many cities, but the way Nashville is set up makes it great for the experience. You can choose between the Broadway route or the Midtown route, but my suggestion would be to do the Midtown route. Chances are you’ll get drawn to downtown in general if you’re staying there, so why not check out a different part of town? Just remember to bring some beer to enjoy while you’re pedaling around.

6. All that pedaling made you hungry, so let’s go get some food. The best Sunday brunch in town is at Copper Kettle. It’s not as widely known as Pancake Pantry, but the all-you-can eat buffet is some people’s favorite meal in the city. (It can also compete with Arnold’s in the meat and three category. Additionally it has a rotating menu for lunch, with the best entrees being a bacon incrusted pork chop, coconut fried chicken, or catfish.) Pancake Pantry is a tad overrated and the line is off the chart so don’t get on it hungry. If you get inside, you obviously want to order the pancakes. Fido Café down the street is a decent alternative if you’re starving and lines aren’t for you. If you’re an aggressive fella that likes to kick game at brunch, then grab some brunch cocktails and eats at Tavern. There’s always great talent at that place, day and night. Broads just love that place. All of these are Midtown options, but there is breakfast for you downtown as well. Puckett’s Grocery & Restaurant is your best option within walking distance.

7. Hot chicken is the food item most well-known coming out of Nashville. In case you don’t know what it is, hot chicken is fried chicken spiced up with some cayenne pepper. If you can handle hot foods, you’re probably laughing at the thought, but believe me when I tell you this shit will make you cry if you go too hot on the order. Prince’s Hot Chicken is the most well-known location to get the specialty, but you can find it also at Bolton’s Spicy Chicken & Fish or Hattie B’s Hot Chicken. (Hattie B’s is the only one that serves beer, which just might be important.) Just make sure you get some extra bread. The “meat and three” is another food staple of Nashville and there’s no place better for it than Arnold’s Country Kitchen. You choose your one meat (I suggest the roast beef or fried chicken, but the options depend on which day you go) and three sides. Don’t forget the piece of pie for dessert. Speaking of fried chicken, the best in town is at Monell’s, which also gives you the good biscuits you expect to eat in the South. There are people out there who love their oysters, so I’ll also mention the Southern for oysters that are flown in daily and a decent steak.

8. Nashville isn’t nearly the town Memphis is when it comes to barbecue, but there are some decent places in downtown. Jack’s Barbecue is the most famous joint in town. You’ll likely have to deal with a line, but the pulled pork, brisket and ribs hold up. People also tend to enjoy their sauces. Edley’s has less acclaim, but better food. You’re going to dominate the Tucks Special, a brisket sandwich topped with pickles, homemade pimento cheese, and a poached egg along with as much sauce as your prefer. A little further outside of town you’ll find Jim ‘N Nick’s Bar-B-Q, which recently made Southern Living’s list of best ribs in America despite the fact that it’s a chain. Featured on Man vs. Food, Rooster’s Texas Style BBQ and Steakhouse offers a free 72-ounce sirloin with a baked potato and salad if you can finish it in less than an hour. Good luck with that. Tacos might not be what you’d expect in Nashville, but San Antonio Taco Company has great queso, good tacos, and the location near Vanderbilt has a great deck to eat and drink outside. Esquire points you in the right direction for late night food with their suggestion to grab the tater tots at the Patterson House. We’ll let you argue if they’re really the best tater tots in America, but very few people ever turn down tots.

9. The lights will draw you to the bars on Broadway as it’s the main strip in town. There are so many options and most of them offer the same thing. The one downside is that basically every bar is country music heavy. If you’re not a fan of it like me, you just have to grin and bear it the whole weekend. The biggest places in town are The Stage, Honky Tonk Central, Paradise Park Trailer Resort, and Tootsie’s Orchid Lounge. Make sure you hit all of them at least at some point on your journey. Picking up at this places isn’t too hard as there are a lot of out-of-towners and everyone is in a good mood. Hopefully you listened to me and picked a hotel within walking distance to close the night easily. If you’re looking for something a little more low-key to start or end your evening, you can check out Fiddle & Steel for a local country band or The Wheel Cigar Bar, which has a name that explains itself.

10. You should spend at least a few hours at the bars in Midtown and hopefully a full night if you were smart enough to make this a three day weekend. You’ll encounter more locals than tourists in the area, but that’s not necessarily a bad thing because everyone in town is friendly. Jed’s Sports Bar & Grille and Sam’s All American Sports Grill are the two spots in the area to catch a game. The Tin Roof is a good place to get your night going, especially if you make it in time for happy hour. There’s a lively day drinking scene at Broadway Brewhouse is known for its Bushwacker, a cocktail strong in alcohol and sweet in taste. You might be slightly confused by the fact that there are two bars next to each other named Winners and separately Losers. Losers is the more fun of the two places unless you’re a fan of karaoke and want to embarrass yourself at Winners. When the night is winding down, it’s time to move over to South. It’s known as a bar for closers. (It’s a simple named bar with a simple premise.)