Why Do So Many People Get Bad Tattoos? This Psychologist Has A Theory 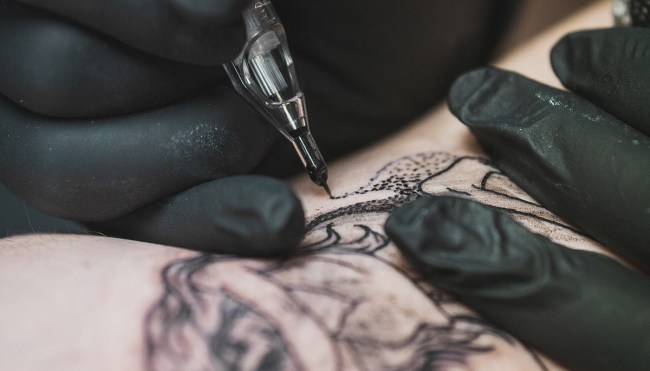 Opting to get a tattoo doesn’t seem like the kind of decision you want to take very lightly when you consider it will be permanently embedded in your skin for the rest of your life. However, that hasn’t stopped plenty of people from putting seemingly zero thought into the many terrible designs you can find online or inside your typical Walmart.

Those tattoos come in many forms, including classics like Name of A Romantic Partner Who’s No Longer In Your Life, the Incorrectly Translated Japanese Character, and the Wildly Premature Super Bowl Victory Celebration. However, that’s just the tip of the iceberg when it comes to the kind of tattoos that people are seemingly begging to regret.

So why do so many people get awful ink? According to a psychologist who spoke with Vice about the topic, there are a couple of primary explanations: people want to fit and they’re also terrified of dying.

“I’m interested mostly in what you’d call ‘the anthropology of self-esteem and identity,'” Dr. Kirby Farrell, a University of Massachusetts professor specializing in anthropology, psychology, and history told Vice. “So I’m thinking of tattoos as a method people use to try to feel significant in the world.

Here are a few more interesting observations from Farrell’s interview.

So how does that translate in to an epidemic of bad tattoos?

I guess a lot of people would say they’d get a tattoo as a memorial to remember somebody or some event. For example, getting song lyrics as a tattoo.

The phrases, of course, turn out to be unbelievably suffocating clichés. So they’re urging you to be a strong individual by imitating all the other animals who are out there putting clichés on their skin.

So where do those two paths cross where, on one hand, people want to do something that brings out their sense of significance and self expression but end up doing the exact opposite by getting what we’d consider a “bad tattoo,” or a “clichéd tattoo”?

I think the fantasy of being special and unique and important and heroic, which we’ve been talking about, is complicated by living in a culture that celebrates those values. We’re constantly bombing other countries in order to preserve our “freedom,” which presumably means individuality.

But at the same time, our culture is intensely conformist. You have businesses constantly trying to imprint a brand on the public awareness. So, for example, if you’re tattooing some nitwit cliché from a pop tune, like “I’ll love you forever,” or “Don’t be an imitator” or something, in effect you’re branding yourself with industrial entertainment.

That last line though…BOOM! Nailed it.

A lot of tattoos seem shortsighted. How do people rationalize the permanence of a tattoo in relation to their own mortality?