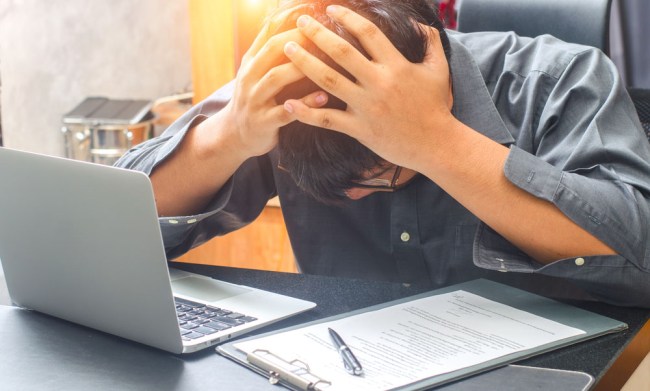 If you are even the teeniest, tiniest bit of a neat freak, or well, just NORMAL, then I warn you, looking at this woman’s computer desktop is going to make you very, very uncomfortable. Oh yeah, and she knows it too. That’s why this woman, we’ll call her Carley, because that’s her name, texts her friend Aida a screenshot of her desktop every day. Just to drive her insane. (Gotta admit, despite the desktop, I like Carley’s style.)

So, if you are one of those people who likes things tidy, get ready to become very stressed out by Carley’s computer desktop.

Yes, I am stalling, because it is so, so bad and I am trying to spare you the horror.

Every day, Carley texts me a screenshot of her desktop and every day, it gets worse. pic.twitter.com/N26KKKo06t

Dear God, please make her stop. How can someone live like that?

Naturally, the many fine folks on Twitter had reactions. They can be, for the most part, broken into two categories.

This gives me anxiety

I'm calling the police on carley

i think my aneurysm just blew

She gotta put the whole computer in rice

this is like looking through a portal to hell

This person should have their computer revoked and adopted to someone who will treat it nicely.

This makes me nervous and scared and anxious all at the same time.

does this person not know what a folder is

This made me nauseous.

take her computer and delete everything

And (2) those who are just like Carley (AKA weirdos)…

And here I thought my desktop was bad pic.twitter.com/veqDk9xkWN

My screen used to be so bad, so I created a "help" folder, so if i take 50,000 screenshots, I just send them to that folder. Only issue now+ pic.twitter.com/Igofibv9Bo

mine spreads across onto my second monitor and still overflows… pic.twitter.com/aFHAFvkea7

On the plus side, at least sharing Carley’s mess on Twitter resulted some therapeutic relief for Aida…

The angry and disgruntled reactions to this make me whole.