Dude Builds World’s Largest Super Soaker That Shoots 243 MPH, Blasts A Bunch Of Kids With It 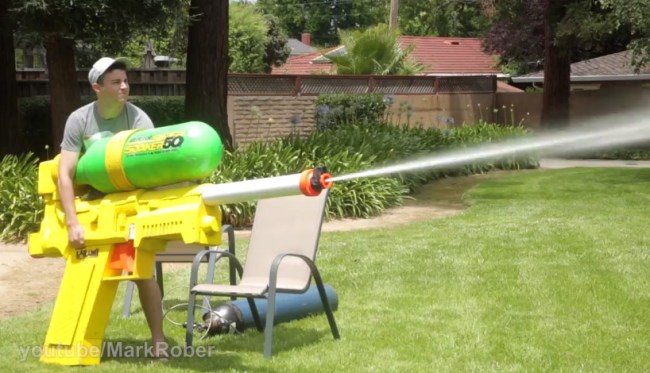 Last year a man named Mark Rober, who just happens to be a former NASA engineer, created the world’s largest Nerf gun. That gun was capable of shooting darts at 40 MPH and of course, it was awesome.

Well, guess what? He’s back and this time he’s put together the world’s largest super soaker and it’s ike legit the largest because it set a Guinness World Record.

Not only is this bad boy seven feet long, it shoots at 2,400 PSI and hits 243 MPH. So naturally, he had to test it out by blasting away at some kids in a very unfair water gun war.

Rober also destroyed a bunch of stuff in slow motion because that’s what any rational human being who invented a super soaker that shoots water at 243 MPH should do.

Here’s how they made it. You know, in case you’re looking for a weekend project or something…