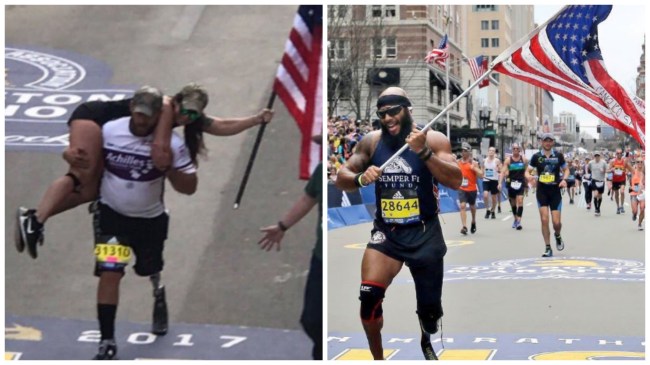 In 2008, during his third deployment to Afghanistan his vehicle was destroyed by a roadside bomb.

Granville has competed in multiple marathons in Chicago, Detroit, and New York using a hand bike, but this time Granville was going to walk the marathon.

Granville, a nine-year-veteran under the Pennsylvania Army National Guard, completed the Boston Marathon with a prosthetic leg. He even carried a woman across the finish line as she held the American flag high.

WATCH: Wounded Vet, who lost a leg in Afghanistan, carries friend across Boston Marathon finish line while she holds the American flag. pic.twitter.com/VDEbubGvE3

Not to be outdone, Staff Sgt. Jose Luis Sanchez also finished the Boston Marathon despite suffering a horrible war injury. The Marine lost the lower part of his left leg after stepping on an IED in Afghanistan in 2011. That didn’t stop Sanchez from finishing the race in five hours, 21 minutes, 56 seconds.

“It’s not for me, it’s for others to be inspired, to be motivated,” Sanchez said after finishing the marathon.

Luis Sanchez and Earl Granville demonstrate the resolve of America and are an inspiration to all.