4 Best Yard Games to Turn Into Drinking Games This Summer 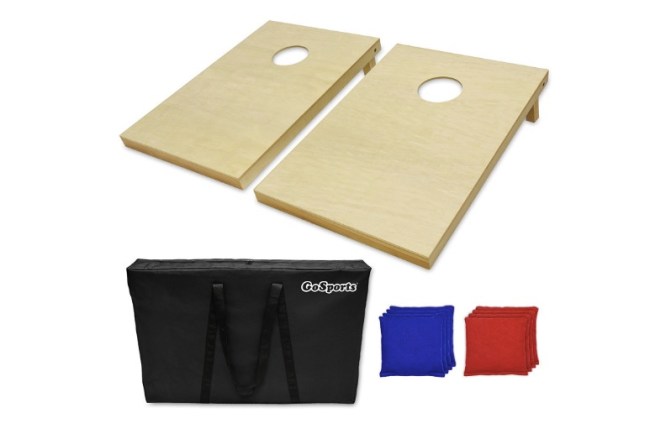 I stammer, fumbling for words. My hands instinctively furrow my brow as I avert my gaze at all costs. Panic gnaws within the meek lady coworker standing in my cubicle, hands restlessly contorting her stack of invitations while she loiters for my response. Everything’s gone blank; I can’t think of anything and probably look like I’m having a stroke or a fart attack.

“Yeah, sure,” I manage, conceding defeat, “I’ll come to your barbecue thing.”

That was three weeks ago. I’m still kicking myself for my inability to muster an excuse because, right now, I’m walking up to her house for the aforementioned barbecue thing. Nervous, my fingers are crossed that uninhibited boozing and gorging awaits and that, for once, it wasn’t a complete waste to spend time on a Saturday putting on pants.

A quick survey of her backyard tells me all I need to know. Yes, there’s plenty of meaty, alcohol-infused fun to be had, but it will take some finagling to get these pastel-clad guests to indulge to my level. We’re far from a tailgate; there’s no Beer Pong, Cornhole, or looming kickoff spurring us into chugging faster and chewing less.

It’s not ideal; all my prospects for drinking partners are wearing khaki shorts and exchanging golf tips. Whatever, when life give you lemons it’s time for another lemon party. I recruit the three least-objectionable people from work for beers and Washers (1) with a suggestive smile pasted on my face that says, “Yeah, I’m more fun when I’m drunk too.”

Whipping washers into boxes and concurrently drinking requires an ideal lack of actual skill or coordination. The game has this antiquated feel to it; it’s a relic from a tougher, simpler time when polio was king, pancakes were made from dust and sewage, and there was no such thing as “campaigning for women voters.” Soon our beers are gone, our modern attention spans catch up to us, and we’re swept away to play badminton (2).

I’m on the court, a beer in one hand and a racquet in the other. I’m releasing pent up aggression in every swing, yet still trying to get my sea legs as I toddle about and try to minimize spillage. We’ve adapted a new, aggressive regiment of drinking for all unforced errors and every time we giggle at the word “shuttlecock.” It’s a sloppy, overconfident affair that culminates with me unapologetically falling into the net and breaking everything beyond repair.

I submit to bocce ball (3) at the likely behest of the now-furious hostess. My shirt and car keys are long gone and my consciousness now easily slips into full-on brownout. There’s a few remaining snippets I can piece together: one’s of me pretending to be Italian and spiking bocce balls into flower beds, another’s of me mimicking a mother bird and throwing up in a vacant nest that I found, and the last’s of other guests surrounding me, intervention-style, begging me to apologize and go home. Looking back, I’m guessing I didn’t win at bocce ball.

It’s dark outside when my waking booze-coma subsides. I’m now on an unfamiliar patio with a mob of complete strangers. A bald, burly man in a wifebeater sits at the table precisely stabbing away at the spaces between his outstretched fingers while everyone else cheers and chugs. Oh, Knife Game (4), you may be technically transpiring on a patio and not a yard, but, regardless, you’re fun and you make me want to get drunk enough so that no one will ask me to drive for his inevitable hospital trip.

Justin Gawel is an adult baby from Michigan whose articles appear on BroBible.com most weeks. Look for his updates at www.justingawel.com or follow him @justingawel on Twitter.