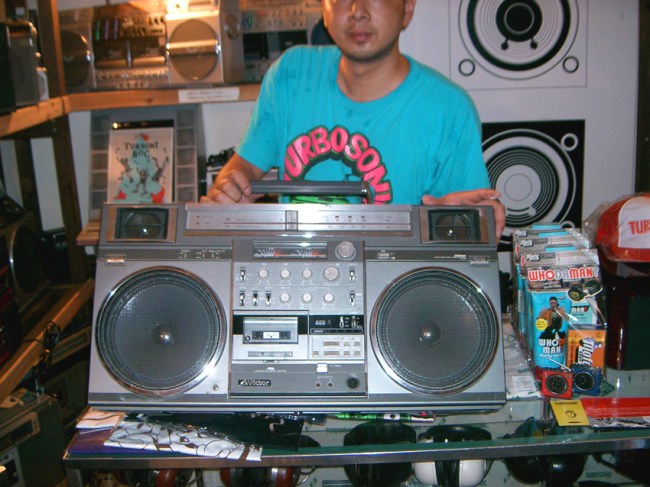 Long before people carried every song ever created in their pockets, boomboxes ruled the world. The clunky, boxy and portable audio players were on every street corner, beach and teen bedroom.

The original boombox was developed by the Philips company, the same people that invented the cassette tape. They released the first “Radiorecorder” back in 1966. In 1989, boomboxes boasted their biggest year ever with an estimated 6.1 million units sold. Sales plunged to around 1.1 million by 2010 and the boombox seemingly disappeared.

But just like the vinyl record, the mighty boombox is making a strong comeback. At least in Japan. The only difference is the resurgence isn’t being led by old folks wanting things to go back to the way they used to be.

While radio-cassette players are viewed with nostalgia among older generations, they represent something new and fresh for young people, even if the machines themselves are considered dinosaurs.

The current excitement over the machines is being boosted by demand from older generations who want to hear the sounds of cassettes once again and young people who are perhaps experiencing radio-cassette recorders for the first time.

Fine, everyone wants to see the boombox come back into our lives.

According to Sogo & Seibu Co, operator of Seibu’s department stores, which hosted the exhibition, the venue mostly drew men in their 40s to 50s, along with many young people. “There is increasing attention being given to nostalgia items,” said the organiser.

If you’re in the market for a new “ghettoblaster” (hey, it’s a real term, I didn’t make it up!) there are plenty of originals available on eBay, or you could be super boring and buy a new one on Amazon.