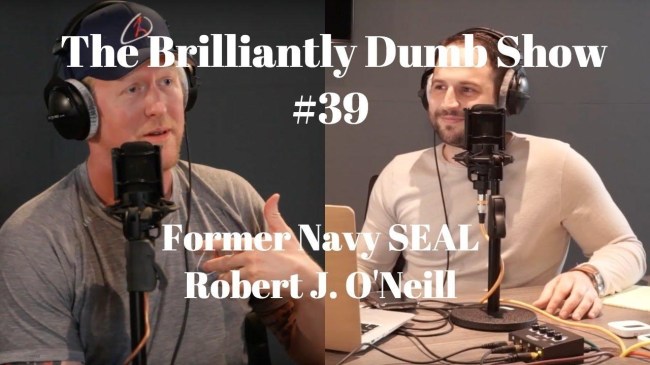 There are certain people you talk to or interview that their story is so good your only assignment should just be to sit there and listen. That was definitely how I felt going into my interview with Robert O’Neill, the Navy SEAL from SEAL Team 6 that assassinated America’s most wanted man, Osama Bin Laden.

Robert came into the studio with his father, Tom O’Neill who had only given one interview before my time with them. For those who don’t know, Robert does not hold much back, he’s a gunslinger who shoots from the hip and likes to tell it like it is. After all, I think we can all agree, he has earned that right. Both Robert and his father give a detailed description of what life was like for him as a kid and when he decided to make the decision to become a Navy SEAL. The interview moves forward into his time with SEAL Team 6 and how they trained for months to capture an objective that they don’t find out until later, was Osama Bin Laden.

I had chills down my body during half of this interview. The detailed description Robert is able to give about the journey to Bin Laden’s house during the raid is absolutely fascinating. Between a crash landing on the arrival to the house, to expected suicide bombers, it is a miracle that the Navy SEALS were able to make it out unharmed.

There are a lot of details to the story that the average person who was not involved can tend to lose sight of, such as Robert having to leave letters for loved ones before what most assumed to be a one-way mission. His father provides chilling stories on what it was like the moment he found out his son had killed Osama Bin Laden.

Episode 39 of The Brilliantly Dumb Show is one I can promise you will not want to miss. It’s not often you get to sit with two American heroes in the same room and have the floor to discuss anything and everything. This was a true honor and something I will never forget. My apologies go out to our next guest of the show as it is an understatement to say, they have a tough act to follow. Enjoy the show folks.