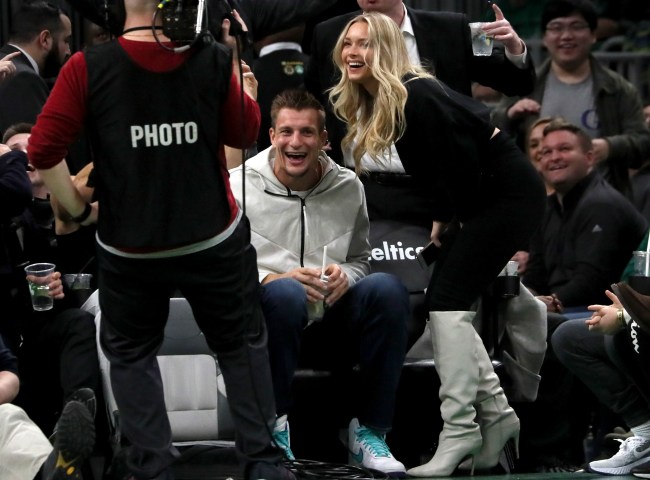 The term Power Couple gets thrown around a lot, but there’s simply no other phrase that encapsulates the five-year coupling between Rob Gronkowski and Camille Kostek.

Rob is a four-time Super Bowl champion and human Transformer and Camille is a former college lacrosse player and classically trained dancer who graces the cover of Sports Illustrated Swimsuit in her spare time. I will be waiting outside the maternity ward upon the birth of their first child to sell that kid on being his or her agent. A sure-fire blue chip stock that takes 18 years to pay dividends. No brainer.

Camille, who is the newly-minted host of the Wipeout reboot on TBS, joined our Endless Hustle show to discuss the unusual circumstances surrounding the first two years of their relationship (Camille was a Patriots cheerleader and at the time, the NFL did not allow inter-organization mingling. Ask Brett Favre).

.@CamilleKostek on when she knew @RobGronkowski was a Good Guy & having to date in secret for 2 years when she was a #Patriots cheerleader.

“So I actually met Rob at a Goodwill event. So, that day I knew he was a good dude.

I met him back in 2013, we were both creating turkey baskets for the less fortunate and we just kind of had our eye on each other. He slipped me his number and I was like, ‘Alright, good dude.’ But of course I was very skeptic of like…does he do this all the time?

We were friends before we were boyfriend and girlfriend and I think that was the recipe for having a long lasting relationship. He’s my best friend. And we had so much fun hanging out all the time. And I mean it when I say hanging out. People are like OK, you guys just watched movies and hung out? And then went home? I was like, actually yeah. And then I went back to my dorm at school.”

On having to keep their relationship secret for two full years due to the NFL’s rules about co-mingling:

“I was a cheerleader so when we met all the time, I wasn’t allowed to even be in public. So we really were able, for two years, I was able just to get to know Rob behind the scenes, quietly. No one even knew that we knew each other to that capacity. So that’s when I knew. Kind of all by myself for two years. I let my family meet him. I met his family. It was all behind closed doors when I was at my work and he was at his work. And when I decided to resign and move to L.A. and do different things, we were like, ‘Alright lets do this publicly now. Can’t be a secret forever.'”

.@CamilleKostek on how she scored the hosting role of the popular @TBSNetwork #Wipeout reboot.

"Finally. This is what I'm meant to do."

Check out our entire interview with Camille Kostek (and PGA Tour golfer Kevin Na) below!