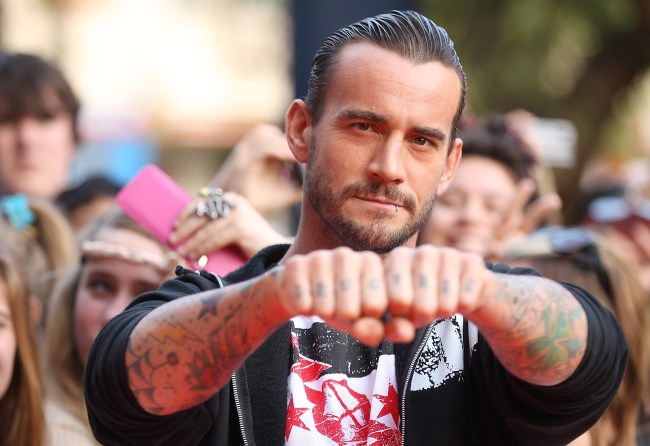 On June 27, 2011, CM Punk delivered one of the most iconic promos in the WWE’s 41-year history, sitting down on the ramp near the end Monday Night RAW as WWE Golden Boy writhes on a broken table on the canvas, and unloading a six-minute diatribe that artistically broke every unwritten rule Vince and the WWE imposed upon employees.

The marriage of showmanship, eloquence, and obvious frustration with the establishment produced one of the most daring six minutes in WWE history.

We spoke with Punk, who’s now starring in the supernatural vampire horror Jakob’s Wife, about that career-defining moment a full 10 years after its inception. In true Punk fashion, he did not mince words.

A decade later, Punk reflects: "The preparation was the years of blood, sweat and tears that lead up to that moment."

“I was always a promo guy. I think I’ve cut better promos, but I’ve certainly never cut a more famous one. You talk about great promos in wrestling and there’s not a lot of guys who have that promo that you can talk about with one word: Pipebomb.

Dusty Rhodes: Hard Times. I’m super proud of that. To stand side-by-side with a guy like Dusty Rhodes, that’s everything 15-year-old Phil wanted.”

When asked if the promo was a “worked shoot,” meaning a scripted segment intended to appear improvised, Punk revealed that he was totally flying by the seat of his pants.

“It was off the cuff. I lost my train of thought at three separate times, and if you watch it, I can tell where I absolutely lose my train of thought. Where the adrenaline is taking over and it’s just a lot of years of frustration boiling over and being told to go out there and say whatever I wanted and capitalizing on that, but also not going overboard…working within the parameters of the television show you’re on and wanting to talk people into the building to come see you versus John Cena, but not getting too overboard.”

The true genius of the Pipebomb promo lies in its restraint—Punk refused to reveal his frustration through F-bombs or other cheap shock-and-awe tactics, instead breaking the fourth wall with precision strikes.

“The preparation was the years of blood, sweat and tears that led up to that moment. I could have dropped F-bombs to make people go, ‘Oh wow! He’s not supposed to say that.’ To me the most effective thing to do was to say Paul Heyman, Brock Lesner, New Japan, Ring of Honor. Those were the equivalent of dropping F-bombs on WWE programming because you weren’t supposed to talk about those things.

When you’re doing live TV, you can do whatever you want. A lot of people don’t realize that. You just have to make sure it’s good, because if it’s bad, chances are you’re going to get in trouble. But I knew it was going to be good, so I got away with murder that night.”

CM Punk also expanded on his relationship with WWE Chairman Vince McMahon, claiming Vince harbored an unnecessary desire to have a relationship with wrestlers, but his willingness to put himself in dangerous situations (like getting walloped in the head by Punk that caused his ears to bleed) was impossible not to respect.

.@CMPunk on his complicated relationship with @VinceMcMahon and why he ultimately respects him at the end of the day.

“I always felt like he wanted a relationship with a lot of wrestlers. And I was always just like, ‘You’re my boss, dude. I don’t need a dad. And I would butt heads with him a lot.”

“…At the end of the day, I think you gotta respect Vince, because a lot of times he wouldn’t have sent anybody out there to do something that he himself wouldn’t have done.”

In his post-wrestling days, Punk is sneaky becoming a respected thespian, most recently acting alongside the great Barbara Crampton in the highly-reviewed horror Jakob’s Wife.

Listen to our entire interview with CM Punk (and comedian Hannah Berner) below: