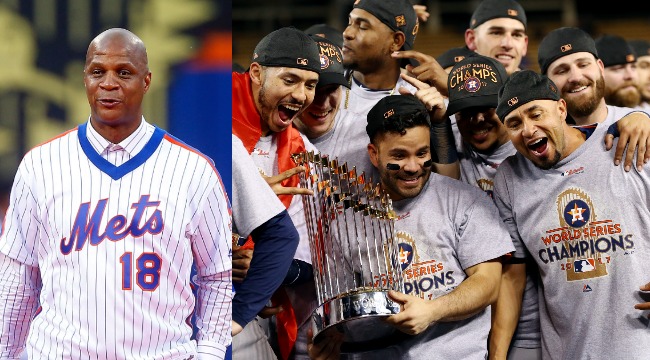 There is nothing Americans loathe more than the manipulation of those in a position of power, which is why the NFL sauntered through a 544 day investigation on ball pressure in a 45-7 drubbing and respected sports publications still believe the greatest dynasty football has ever known is nothing more than a product of deceit.

It’s only the successful who undergo a moral colonoscopy, which is why we never hear about the Jets filming the Patriots practice one year before it was given the fancy name Spygate.

That said, there are very few humans outside of the Lone Star State who view the 2017 Houston Astros title as totally legitimate, as the use of cameras and trash cans to steal signs directly impacts the game in a way that a flat football cannot.

Four-time World Series champ and Old School Guy Darryl Strawberry joined our Endless Hustle Show to discuss the secret ubiquity of “cheating” in the MLB and claimed the Astros should covet their title just as any other World Series winner should.

"Players have cheated forever." On Episode 23 of the pod, #DarrylStrawberry says the @Astros went a little too far when it came to the unwritten rule-breaking of @MLB.

“At the end of the day, a title is a title. Players have cheated forever. We used to pick signs. Steal signs. You can watch the catcher. Watch the way he moved in and out. You know, if it’s a fastball in, fastball away, but you don’t throw a breaking ball away. You don’t throw a fastball in. It’s part of understanding the game and everything. I just think it was a different time.

I think Beltran took a lot of heat dumped on him, but he’s a tremendous person. He’s just like anyone else who’s played the game. Realizing, understanding how you can get signs from the catcher. It’s on them. They should do better knowing that we’re going to pick up signs and that’s just the way it is.

I think the difference was the Astros went a little too far on stealing signs with the trash can and all the things the were doing. I think that was a little bit overboard.”

Beltran of course was fired as Mets manager before the 2020 season after he was implicated in the sign-stealing scandal. Last month, Strawberry went to bat for Beltran, claiming he’s a wonderful guy and the Mets should have stuck with him. Not surprising from a guy who knows a thing or two about second chances.

Tune into our entire fascinating interview with Straw below. We discuss his wild and turbulent journey in the MLB, the unwritten rules of baseball, Negro League stats being rolled up into the MLB, Mets management, and much more!