Former Heavyweight Champ Lennox Lewis Weighs In On The Tyson/Jones Jr. Fight And If We’ll Ever See Him In The Ring Again 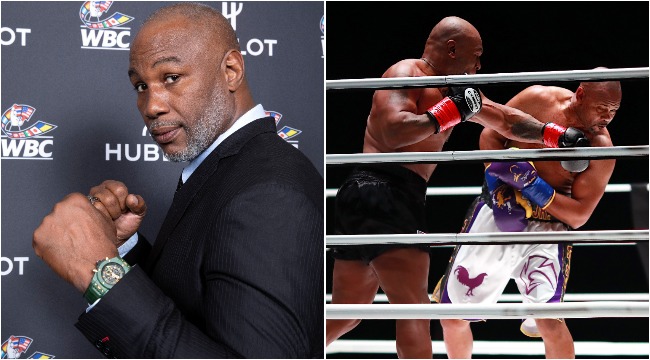 Lennox Lewis has carved out his place on the Mount Rushmore of Athletes Who Don’t Get Enough Credit For Their Accomplishments, nestled right there between Marvin Harrison and Larry Bird.

George Foreman called him the “best heavyweight of all-time” after beating Tyson and it appears he still holds him at the top of the mountain.

I would not have fought Lewis. No way. https://t.co/7k0atifJJS

On Episode 19 of our podcast, @Lennoxlewis comments that @MikeTyson looked good in his fight against @RealRoyJonesJr, says no one has challenged him in the ring recently, and more! Stream & download in full here: https://t.co/Zm4LjxTiDu pic.twitter.com/qZC7wuLdcd

When asked whether he—at 55—plans to enter the ring a fight like Tyson/Jones, which amassed over $80 million in pay-per-view revenue, he said: “Nobody has challenged me yet. I don’t know how I feel about it.”

“I think it’s great watching Mike Tyson and Roy Jones get in there. I’m like, ‘What is Roy Jones doing in there? He’s not a heavyweight. It looked to me that Tyson was really pulling some of his punches. If I was the ref I would have given Roy a couple warnings about holding, but I understood that he was in the ring with a stronger man than him. So it was definitely telling down the road, but I like how Mike Tyson looked.”

Everybody has in their mind, ‘I wonder what he is still like. Can he still do it?’ My son was saying, ‘Hey dad, look, I’m watching two guys that were in your era box on TV. This is great.’ I’m like, ‘Ok, from a kid’s point of view it’s great, from my point of view I guess it’s nice to see.’ That’s how I look at it.”