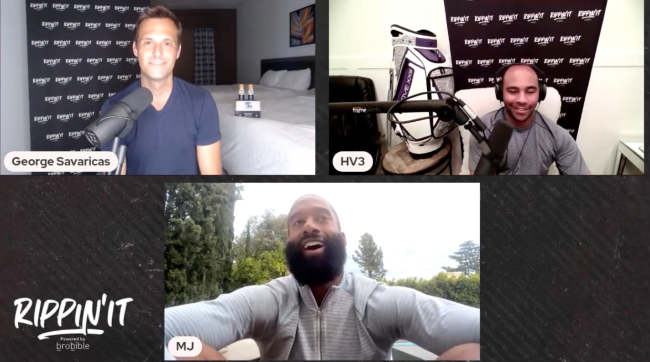 Losing golf balls is just part of the golf experience, everyone that’s ever stepped foot on a golf course has lost at least one golf ball. For the high handicappers and golfers out there that are just generally awful at the sport, the trick is to not run out of golf balls. You don’t want to be in the middle of the round and have to ask your playing partners for golf balls, that’s about as embarrassing as it gets.

Matt James of ‘The Bachelor’ seems to have figured that part out, he comes well-equipped with plenty of golf balls because he knows he’s going to lose so many throughout a round.

James joined Harold Varner III and George Savaricas on the latest episode of Rippin’ It and shared what type of golfer he is. Instead of going out and playing as many holes as he could during the filming of ‘The Bachelor’, he said he’d go out and play “as many balls as I had.” That’s a phrase only a person that is elite at losing golf balls would say, and it’s safe to say Mr. James is elite given the fact that he once lost 36 golf balls in just three holes.

“One day a week, when we had a low-key morning, I’d get to go out on the golf course and play as many balls as I had,” James explained. “I’d go through a couple of cases and once I ran out of golf balls I’d call it. Towards the end of filming, I made it through 18 holes. But the first time I went out on the course – you can call the head pro at Nemacolin – I lost 36 balls in three holes.”

While filming #TheBachelor during quarantine, Matt James picked up golf.

You can watch the full interview with James below on YouTube and be sure to subscribe to Rippin’ It on Apple Podcasts, Spotify, and Anchor.