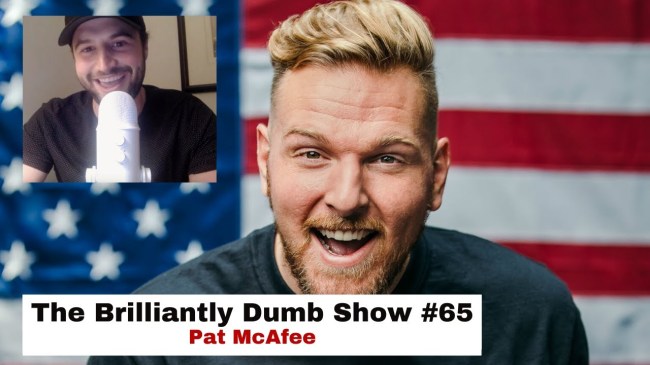 I think every podcaster has its ideal Top 5 guests that they would want to have on their show. Whether it is written on a piece of paper or in their head you can’t help but consider who your Mount Rushmore of guests would be. I’m not sure if Mount Rushmore is 4 or 5 people, but you get where I’m going with this. Since I started The Brilliantly Dumb Show, Pat McAfee, without question, has been on mine. On today’s podcast, we were able to get that one crossed off our list.

Is McAfee an A-list celebrity known and adored by the entire planet? Probably not, but you can not overlook a guy who you know is going to bring as much energy and laughs like McAfee. A lot of those A-listers out there have a specific set of questions that you can and can not ask, usually those come from their publicists, not even the talent itself. McAfee, I can assure you, is not one of those guys. When you watch this interview we had with him you will see that nothing and I mean absolutely nothing is off-limits.

From his 2010 arrest for ALLEGEDLY jumping into an Indianapolis lake while belligerently wasted, to his playing and partying days with Peyton Manning, it is a roller coaster of an interview that I never wanted to end. If only all guests could be as off the cuff and as much of a gunslinger as McAfee is, we would hear stories about different athletes and movie stars that would just blow our minds.

In the meantime, let’s chalk this one up as a W for The Brilliantly Dumb Show as we now have crossed off two of our Top 5 guests. Robert J. Oneil, the Navy Seal who assassinated Osama Bin Laden, and Pat McAfee. Next in line to complete our quest for the Top 5, Charles Barkley, Howard Stern (.00001% chance of that happening) and John Daly.

Related: Pat McAfee Shares The Story Of Being Seconds Away From Getting A Delay Of Game Before Kicking Off The 2010 Super Bowl