‘The Mandalorian’ Recap And Review: “Chapter 12: The Siege” 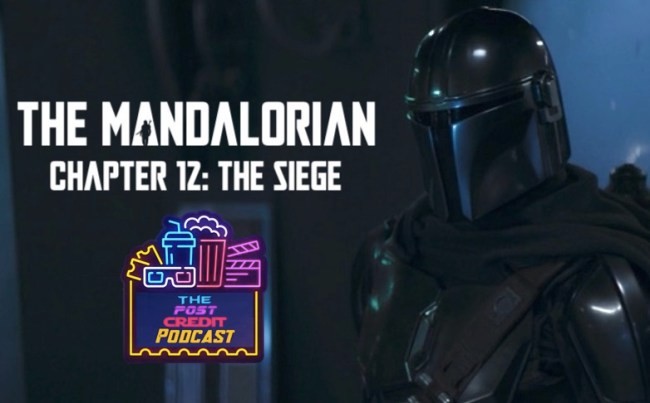 After initially feeling a bit worried about the direction of The Mandalorian following the first two episodes of season two, the Disney+ series has now delivered back-to-back season-best episodes, righting the course as season two heads into its back half. As I noted on the Post Cred Pod Twitter account, all of the footage in the season two trailer has now been used, meaning everything that’s set to come in the final four episodes will come as a surprise to fans, especially given how “Chapter 12: The Siege” ended.

If you’re more of a podcast person, check out our full Chapter 12: The Siege deep dive on the latest episode of the Post-Credit Podcast. Or if you’re more of a traditionalist and prefer the written word, keep scrolling for our full Season 2, Episode 4 breakdown.

As I’ve long argued, The Mandalorian is at its best when it’s focused on its main narrative, even in a tangential fashion. For example, while this week’s episode may ultimately be a “side quest” episode, it’s a quest that involves the storming of an Imperial base — the direct enemy of Mando and Baby Yoda — with previously established allies rather than trotting off to some nondescript planet to fight some nameless creature with a newly introduced nobody that will be discarded before the end of the episode.

The siege of the old Imperial base provides this crux of Chapter 12, as it not only drives the action but it adds further lore, context, and plot to a season that’s been lacking exactly that so far, namely, we finally got an update of where Moff Gideon is and what he’s up to.

What he’s up to, as it turns out, appears to be an experiment designed to create Force-sensitive soldiers. As Mando, Cara Dune, and Greef Carga are making their way through the base, they come across two Imperial guards manning a station that’s filled with vats of what appear to be cloned bodies. After disposing of the guards, Mando uncovers a message from Dr. Pershing, the impish Kamino cloning facility doctor we saw with Werner Herzog’s The Client in season one, that reveals they took the blood of The Child (they would’ve taken more if they could, but it would’ve killed him), which has an unusually high M-count (midi-chlorians count) to engineer said Force-sensitive clones.

At that same time, during the aforementioned Moff Gideon update, we see that he’s fully prepared for the arrival of a Force-sensitive army, as he appears to be standing in a room filled with uniform, ready-made militaristic gear. The mere mention of Moff Gideon elevates this show to dramatic heights that make The Mandalorian more than some “adventure of the week” romp. The literal moment Mando realizes Moff isn’t dead, the inherent tension of the moment, and the series as a whole, spiked. With the knowledge that Moff has planted a tracker on Mando’s ship, that very narrative tension will continue to build before coming to a head before the end of the season, possibly even in the coming episodes

Combined with some thrilling vehicle-related set-pieces — Cara Dune and Greef Karga’s escape, Mando’s dogfight against the TIE Fighters in his newly-suped-up Razor Crest –and the further explanation of Moff Gideon’s whereabouts and intentions, “Chapter 12: The Siege” represents yet another high-point for season two and has positioned the final four episodes of season two to be a 110 mph downhill sprint that should likely surpass the excitement of season one.

With Chapter 13 reportedly being titled “The Jedi”, next week’s episode looks set to continue this propulsive forward momentum and unleash the debut of Rosario Dawson’s Ahsoka Tano, the beloved Jedi and former Anakin Skywalker Padawan from The Clone Wars and Star Wars Rebels. Going out on a limb a little further, with Moff Gideon hot on Mando’s tail, hopefully, that means we’ll get to see Ahsoka in action and possibly even use her lightsaber. No promises, only high hopes, which is exactly where my expectations for this season now lie thanks to the strength of Chapter 11 and Chapter 12.

“Holy shit!”: when he takes those blue cookies from his classmate. Not necessarily a “holy shit!” moment, but it is the first time he’s used the Force this season.

As mentioned above, Dr. Pershing states that Baby Yoda’s blood has a high “M-count”, which references the amount of midi-chlorians he has in his body. It essentially measures how Force-sensitive someone is. According to Wookiepedia, midi-chlorians are “microscopic, intelligent life forms that originated from the foundation of life in the center of the galaxy, and ultimately resided within the cells of all living organisms, thereby forming a symbiotic relationship with their hosts.”

The dogfight between Mando’s Razor Crest and the Imperial base’s TIE Fighters.

See above in the Jedi temple: M-count.

As I said in my recap, the debut of Ahsoka Tano looks to be locked in. Let’s hope we get a little lightsaber action with it.

The next episode of #TheMandalorian is reportedly titled: "Chapter 13: The Jedi" 👀 pic.twitter.com/6M6pYbzsJu