‘WandaVision’ Continues To Weaponize Normalcy In Its Best Episode Yet 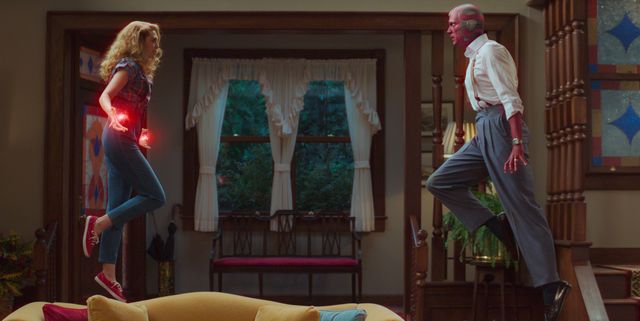 When we’re covering WandaVision on the Post-Credit Podcast, I almost (almost) get sick of hearing myself talk, as I’m continually referencing WandaVision‘s ability to shift tones on a knife’s edge. One second, everyone in the frame is having a hearty laugh, and the next, a complete silence befalls the room, as if everyone knows the truth but no one dare speak it. The series takes usual sitcom stereotypes and completely inverts them, instead using traditional television comedy trappings as moments of unflinching tension and anxiety. You realize how unsettling a laugh can be when it comes at the wrong moment.

This weaponization of television normalcy has been WandaVision‘s greatest strength thus far, and that mastery of subversion continues in Episode 5, “On a Very Special Episode…”, which sees the walls that Wanda has built for herself begin to close in.

Think of Agnes acting like an actress and asking if she can take it from the top, or Vision sitting in horrified confusion as his colleagues read an email about the Maximoff Anomaly out loud, or Wanda choosing to roll the credits in the middle of an argument: it’s these moments of bold storytelling and blatant subversion that represent some of the most experimental content Marvel Studios has ever produced, as the reward thus far has been one of the most unique viewing experiences they’ve provided.

For years, the general knock against the Marvel Cinematic Universe has been its formulaic nature, that it’s merely a multi-billion-dollar assembly line, chopping and changing superfluous features that always amount to the same B+ product. That is, quite obviously, not the case in WandaVision, as the series is not only wading into new dramatic territories for the MCU, but it’s charting a new plotting course, as well. When you fire up ansub MCU movie, you know some assess will be kicked, some jokes will be made, things will get a bit hairy for the good guys before they ultimately come out on top. Can you say the same about WandaVision? Do you have any real idea of how this story might end? Can the characters *in WandaVision* even say so?

That said, there is an element of predictably to come, as the trajectory of recent episodes allows us to confidently guess that WandaVision‘s final four installments will be a downhill sprint more in tune with the third act of a traditional MCU. But the details of those episodes? Your guess is as good as mine.

The Marvel Cinematic Universe, 13 years into its existence, has become the bastion of Hollywood normalcy: every six months they release an above-average-to-great, well-received superhero movie that makes anywhere from $650 million to $2 billion worldwide. But in WandaVision, Marvel has thrown normalcy — both of their own well-worn design and that of television from decades past — out the window to create something entirely new. While WandaVision may not end up being the best MCU project to date, it’ll certainly rank among the most interesting, and that’s an achievement unto itself: bringing something new to the sprawling, gold-plated table of the MCU.