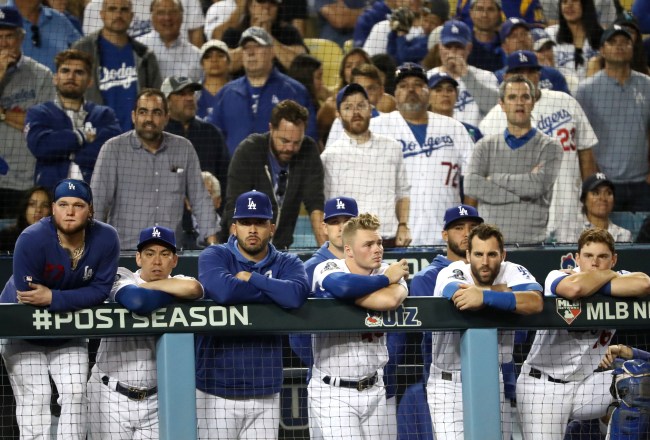 The Dodgers pooped their pants again. Figuratively, of course. Well maybe literally, if they’re like me and their brain and buttholes sleep in separate rooms seven days a week.

There’s been only one other team ever, the 1995-1999 Cleveland Indians, to make it to 5 straight playoffs and not win the World Series. The Dodgers–who won seven straight division titles, two consecutive pennants, several 100 win seasons–have 0 championship rings to show for it.

The Dodgers' struggles continued for a seventh straight postseason. pic.twitter.com/z95UwdaX10

Let’s look at 10 Dodgers fans who are in a world of hurt today.

Anyway I love my dodgers so much and I hex anyone who uses the ch*keshaw nickname, it isn’t clever and you aren’t funny

Telling the internet to stop making jokes is as fruitless as telling the sky to stop raining. The internet salivates over the misfortune of others. It’s always better to embrace the hurt rather than fight it. In visual terms:

Good Morning to everyone except the #Dodgers pic.twitter.com/tb9OTT8hJI

Must be tough for Dodger fans to wake up today. If it makes you guys feel any better, Clayton Kershaw is still in bed listening to Bon Iver while deep in a gallon of Ben & Jerry’s and watching the ball go through Bill Buckner’s legs on repeat because misery loves company.

After last night, I know a lot of you don’t have any reason to, but I’m gonna wear my Dodgers cap today.

I’m not embarrassed to be a Dodger fan.

I’m proud of being part of this fan base.

OOoooOoOoo LoOk At ThE hErO! Some of the worst types of fans after big losses are the wax poets who put their hands over their hearts while watching a dumpster engulfed in flames. Make sure you throw a few spaces in between sentences for dramatic effect.

We absolutely love our @Dodgers and are so very proud of them! This one was tough, but let's all appreciate being in the mix year after year. Looking forward to 2020! #PROUD

I’m just picturing a banner hanging from Dodger Stadium with the phrase “In The Mix Year After Year (Year-Year)” proudly stitched across it.

Dodger fans are running over a Kershaw jersey. pic.twitter.com/kDwYOg9xzA

Hey, hey, hey. Those jerseys cost $119.99 on the MLB Shop website, or absolutely free at your local dumpster.

Brutal loss last night! We are still die-hard @Dodgers fans at #SynergySoCal though! Can’t wait for next season. On to the next… let’s go @Lakers! pic.twitter.com/tg1XBOYnGv

Its official… The @Dodgers are the @dallascowboys of the majors. A shell corporation if you will. A scam. Frontrunners! 🙈

Oh that’s cold. I can understand ‘Pants-Shitting-Mentally-Weak-Pansy-Losers’ but comparing them to the Cowboys is a bit extreme. Where is the damn ‘REPORT’ button on this website?

Okay. Who fucking did this ? pic.twitter.com/0MAguzDzAp

The intersection of art and truth is where true masterpieces lie. And they had to do Clayton dirty by giving him gingivitis.

My deskmate had this hanging up for the Dodger fan who sits next to us 😂 pic.twitter.com/Su5M5k6ThX

Being roasted by Kathy from Human Resources is the leading cause of inter-office homicide.

Me at the moment: I don’t know why I like baseball. I always end up broken hearted. Dodgers always choke#Dodgers: Buy your tickets for our matchup against the Giants on June 22nd and receive a Cody Bellinger bobblehead

Some would call being a Dodgers fan an addiction. I call it a disease.

Hug a Dodgers fan today. Then immediately shower to wash the failure off of you.