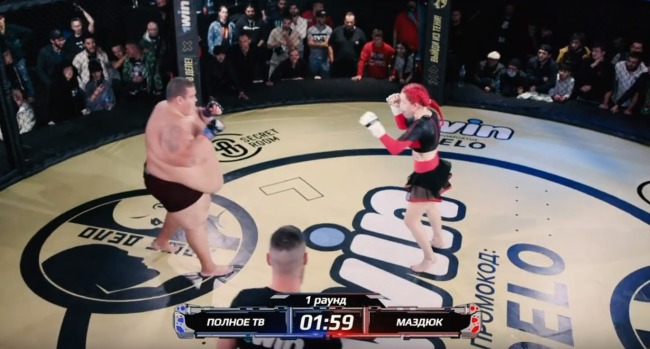 While many people were locked in on Mike Tyson’s fight against Roy Jones Jr. this past weekend which ended in a not-at-all rigged draw, there was another historic combat sport event taking place in Russia at an event titled “Our Business.”

The event was a cross-gender bout between 139 pound female mixed martial artist Darina Madzyuk and a 529 pound man Grigory Chistyakov.

The fight lasted just 90 seconds after Madzyuk, despite being outweighed by 390 pounds, dropped Chistyakov and unleashed a flurry of unblocked punches to his dome, resulting in a TKO victory.

Initially, Chistyakov was able to utilize his massive weight advantage to push Madzyuk around the cage, even pushing her up against the fence at one point, trapping her in a headlock.

Unfortunately for him, after many seconds of inactivity, the referee eventually called for a break and that was pretty much all she wrote as Madzyuk was able to open up on Chistyakov and finish the fight with some ground and pound.

Reactions to the spectacle in the world of mixed martial arts were just that, mixed.

Former UFC fighter Julie Kedzie congratulated Mazdyuk in a tweet, writing, “Hope she keeps going. It takes a certain kind of bravery to fight that last bout, and I sincerely hope it gets funneled into a career that makes her bravery universally applauded.”

WTF is even going on in Russia https://t.co/JXQ1B71m0u

UFC commentator John Gooden and UFC referee Marc Goddard were none too pleased that fights such as this are still allowed to happen in 2020.

Whilst so many have been battling to validate mixed martial arts, this kind of thing threatens to undo so much good work. This stuff makes my blood boil

This is what we are dealing with - in 2020. This is what we are fighting against as the parallels & negative connotations are continually drawn. To outsiders & detractors this is MMA. Shameful. Sickening. Abysmal. 😔 https://t.co/lWDyXy7R0z

Following the fight, if you can call it that, Chistyakov said, “It happened. She hit me fine and I fell. Although she is small … I lay on her back, but she did not fall, and than I didn’t know what to do.”

Check out his “fight” versus Madzyuk in the video below.

Personally, I liked this fight better the first time I saw it back at UFC 3 in 1994.