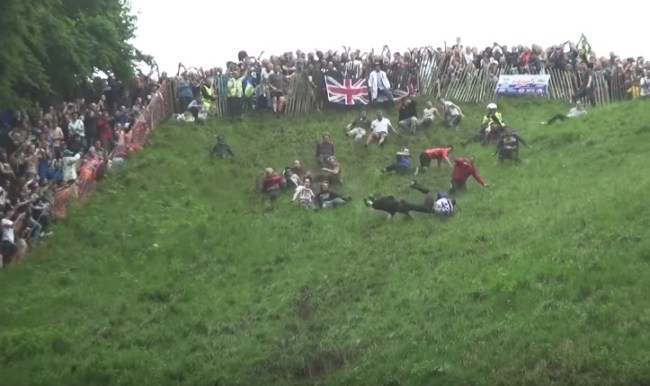 Cooper’s Hill Cheese-Rolling and Wake is an annual event held just outside of Gloucester, England, and it’s better known to folks like myself as the Gloucester Cheese Rolling competition. The event kicks off with a 9-pound wheel of Double Gloucester Cheese getting tossed from the top of a steep mountain hill. Competitors then haul ass down the mountain in an attempt to catch the cheese.

The wheel of Double Gloucester Cheese is said to reach speeds of up to 70 mph flying down the mountain. This could actually cause some serious damage to anyone attempting to catch it. You can read all up on the annual Cheese Rolling event here on Wiki, but don’t peace out of here before checking out the highlights from this year’s event.

The 2017 Cooper’s Hill Cheese-Rolling and Wake was held a month ago, and I would’ve brought you bros coverage back then but I only now just thought to search ‘2017 Cheese Rolling’ on YouTube. According to the description of the second YouTube video above, the event is now technically illegal because it poses a danger to anyone participating. Illegal or not, a shit ton of cheese rollers still showed up on Cooper’s Hill this year to try and catch the 9-pound wheel of cheese.

I’m adding this event to my ‘Ultimate Sporting Events’ bucket list. I need to see this in person and participate one of these days. I feel like Cheese Rolling is something I can truly get on board with.