Here’s How Likely Every MLB Playoffs Team Is To Make The World Series, And It’s Great News For Indians Fans

The Yankees are in, Twins are out. Tonight, the Colorado Rockies and Arizona Diamondbacks will square off in the NL Wild Card game. Hopefully, the second MLB Playoffs game of the year won’t drag on as long as last night’s marathon game. The first inning of the Yankees-Twins went past 9pm last night which is straight up insanity. But, now that the Minnesota Twins are eliminated from the 2017 MLB Playoffs we have a clearer picture of every team’s chances to make/win the World Series.

Nate Silver’s FiveThirtyEight has been pretty solid at forecasting MLB Playoffs chances, and his model shows that the Cleveland Indians are the clear front-runner to both make and win the World Series this year. This model will obviously change after tonight’s Rockies-Diamondbacks game, and it will continue to change after every MLB Playoffs game that gets played. As things stand right now, it’s great to be an Indians or Dodgers fan: 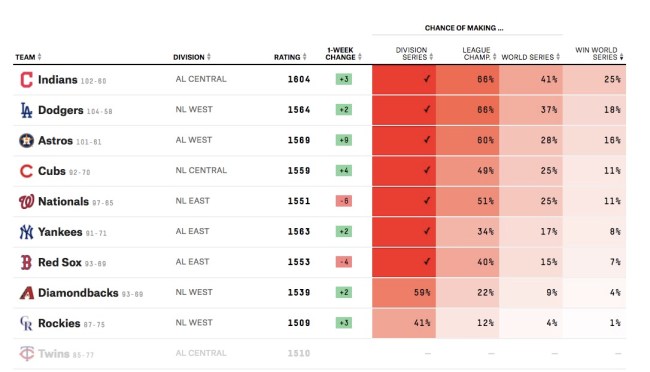 The great thing about playoffs in any sport is all you have to do is make them and anything can happen. We see this every single year, in nearly every sport. A dark horse team that’s an 8th seed will make a deep run in the playoffs and shock everybody.

Given how the Los Angeles Dodgers showed their weaknesses down the stretch, and their proclivity for slumping, I’d say that they’re much more prone to being eliminated by a lower seed than the Cleveland Indians are. But, this is baseball. The Indians set the modern era MLB record for longest win streak this season. Given how goddamn good the Indians are, and how all indications point to them dominating everyone on the Playoffs, I’d actually be SHOCKED if the Indians don’t start slumping immediately. Sports is weird like that.