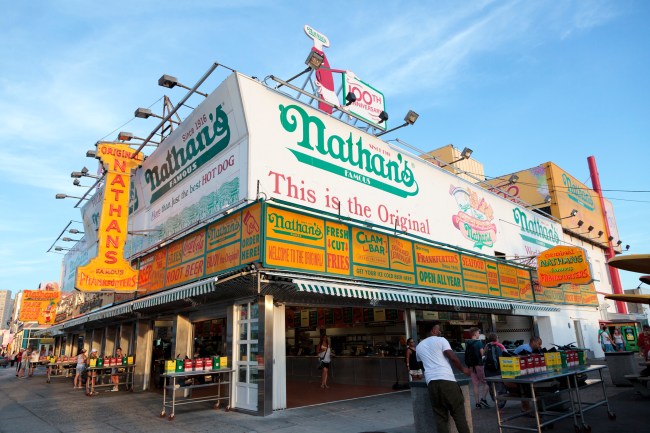 The single greatest sporting event in America will take place this week, the Nathan’s Hot Dog Eating Contest in Coney Island. Reigning champion Joey Chestnut will take the stage again in an attempt to reach God Status™ in the competitive eating world.

Joey Chestnut has already won the Nathan’s Hot Dog Eating Contest a record 11 times. The next closest competitor was Japan’s Takeru Kobayashi who hasn’t competed in the 4th of July hot dog eating contest in years but back in the day, he was unbeatable and won the Nathan’s contest 6 times.

Only ONCE since 2001 (18 years) has anyone other than Takeru Kobayashi or Joey Chestnut won the Nathan’s Hot Dog Eating Contest and that was in 2015 when Matt Stonie took home the title after eating 62 hot dogs to Chestnut’s 60. Joey’s won it every year since and is the overwhelming favorite to win again this year, especially after setting a world record of SEVENTY FOUR HOT DOGS AND BUNS in last year’s competition.

The New York Post published a lengthy feature on the Nathan’s Hot Dog Eating contest that included some random facts about the competition like how much money Joey Chestnut has made from competitive eating (answer below) and how the current price of a Nathan’s Hot Dog at Coney Island is $3.99 but it was only $.05 back in 1916 which is said to be the year when the contest was first held but the Post points out that story likely isn’t true:

According to Shea, the official story is that it began in 1916, the same year that Nathan Handwerker opened his first hot-dog stand in Coney Island. That Fourth of July, four Nathan’s customers, all recent immigrants, argued about who was the most American. They decided to settle it with an eating contest.
It’s a fun tale, but it probably isn’t true.
“The story was made up by Max Rosey and Mortimer Matz, the p.r. guys who created the contest in the 1970s,” says Jason Fagone, author of “Horsemen of the Esophagus: Competitive Eating and the Big Fat American Dream” (Broadway Books).
Shea, who has made it his life’s work to nurture and build on the contest’s mythology, admits that the origin story is “aspirational history.” (via)

The article went on to talk about the ‘cultural shift’ that took place in 2001 when Kobayashi showed up on the scene and changed it forever. Before Kobayashi, the competitors were said to be ‘in on the joke’ but he showed up after training his ass off to win the competition and blew away in the competition in ways that nobody believed was possible.

The secret to his success in competitive eating sounds straight up painful (and gross):

“In eating, there are two eras,” says Fagone. “Before Kobayashi and After Kobayashi. Until he showed up, competitive eaters tended to be in on the joke. They were doing it with some degree of irony. But Kobayashi wasn’t, and that was his great innovation.”

Kobayashi tells The Post that his secret was a combination of training — it involves drinking three gallons of water in 90 seconds to expand his stomach — and his “ability to focus more than others.”

He also originated, in 2002, the “Solomon Method,” a speed-eating technique where each hot dog is split in half and both ends forced into the mouth, side by side. (The name, invented by fans, is an allusion to King Solomon, who once threatened to split a baby in half.) (via)

I’ve always joked with friends about wanting to set up an organized hot dog eating contest but I don’t think there’s any way in hell I could ever bring myself to dunk a bread bun into a glass of water and eat that. That’s where I’m out, and it’s for that reason that I’d be left in the dust.

The winners of the Nathan’s Hot Dog Eating Contest, the premier event in competitive eating, receives a $10,000 cash prize. $10K goes to the winning man and woman. According to the Post, there are roughly 3,500 competitive eating events in America each year with 1st place prizes ranging from $1,000 to $8,500 outside of the Hot Dog Contest.

Joey Chestnut has made over half a million dollars just in prize money from eating faster and larger quantities of food than anyone else on the planet:

And this isn’t the only contest with high financial stakes. There are roughly 3,500 eating competitions in the US annually, and the top awards range from $1,000 to $8,500. There’s real money to be made for anyone with enough gastrointestinal endurance.

Chestnut has won nearly $600,000 during his eating career since 2004, according to competitive eating database EatFeats, and that doesn’t include endorsements and business deals such as the line of condiments Chestnut launched last year. (via)

But the money doesn’t come without risks. A 2007 study, published in the American Journal of Roentgenology, found that competitive eating could lead to, among other serious ailments, profound gastroparesis — a disorder in which weakened stomach muscles cannot properly move food through the digestive tract. Chestnut admits he worries about the health consequences but tries to stay ahead of it, getting two separate blood panels during his training months and meeting with his doctor regularly.

Former competitive eater and Nathan’s champ Tim “Eater X” Janus retired in 2016. Earlier this month, he revealed on Twitter that he’s concerned about how competitive eating has ravaged his health.

“[I] threw up almost 10,000 times in my 12-year career,” he tweeted. “I don’t yet know the effect that had on my stomach, my throat, my teeth and the little capillaries inside my head that strained with each retch.” (via)

Joey Chestnut doesn’t have any real competition this year, at least not based on the past few competitions. But Matt Stonie came out of nowhere in 2015 to beat Chestnut and there’s always the possibility that something like that will happen this Thursday on the 4th of July when the Nathan’s Hot Dog Eating Contest takes place on ESPN.

For what it’s worth, this is 100% something that’s better to watch on TV than see it in person. I made the mistake of going to Coney Island on a holiday once (Memorial Day) and it was literally hell on earth. From the moment I stepped off the train it was so packed out there you could barely walk, it was like walking in a line everywhere you went. Go in the offseason if you want to see it, not on the 4th of July.

To read the full profile on the New York Post to get hyped up for this year’s Hot Dog Eating Contest, just click that link!