Who Had A More Disastrous Start To The 2019 Open Championship, Rory McIlroy Or David Duval? Let’s Take A Look 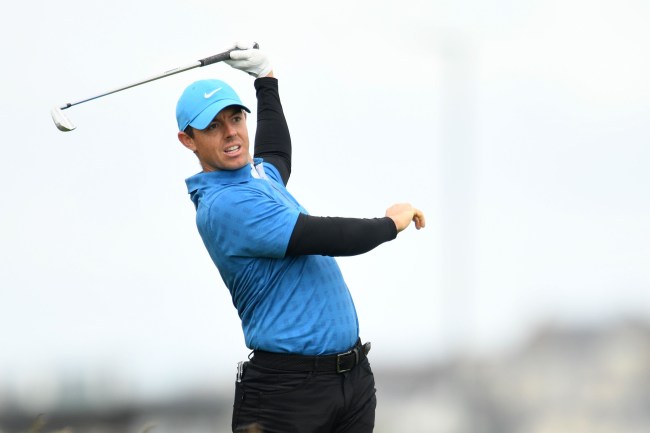 The 2019 Open Championship at Royal Portrush Golf Club in Antrim, Northern Ireland kicked off in the wee hours of the morning here in America. Ireland’s Shane Lowry is the early clubhouse leader at -4, tied with Scotland’s Robert MacIntyre. There are a handful of players on the course at -3 but there’s still A LOT of golf left to play today with most of the world’s top players yet to tee off.

Thanks to my 3.5-month old baby boy going through something called ‘sleep regression’, I found myself awake in the middle of the night and was able to flip on the early coverage of The Open and holy shit did some of these players have disastrous starts.

One of those players is David Duval, a guy I didn’t even realize was still on the PGA Tour. He used to be one of Tiger Woods’ biggest rivals but back injuries derailed him from the top of the world rankings. David Duval began the tournament with 3000-to-1 odds so people were SHOCKED when he opened his 2019 Open Championship with two birdies (-2 through 2) followed by two pars. Then everything went to complete shit in a hurry.

David Duval recorded an ‘8’ on the Par 4 5th hole, a ‘4’ on the Par 3 6th hole, and the wheels REALLY came off when he put a ’13’ on his scorecard at the Par 5 7th hole. He went from near the top of the leaderboard to complete obscurity in a flash.

Another player that got off to a horrendous start was Northern Ireland’s own Rory McIlroy who is a local favorite and one of the world’s best players. It’s unclear if it was nerves or just an awful swing, but Rory sent his tee shot out of bounds on the FIRST TEE and ended up making an ‘8’ on the very first hole of his 2019 Open Championship.

So who had the worst start to their Open Championship, Rory McIlroy or David Duval? Let’s compare and contrast after looking at some footage and tweets.

Near the top of the leaderboard!

He closed with 3000-1 odds at some books. pic.twitter.com/cIKOhbUfE3

UPDATE: David Duval is no longer on the first page of the leaderboard.

Congrats to anyone who had Over 14.5 for the highest score on a hole this week 😳 pic.twitter.com/M9NiSMg8WN

Not the start to the Open Championship that David Duval had in mind. But he’s no longer one of the world’s top players so he couldn’t have been all that shocked to be off the lead.

Rory McIlroy on the other hand. My goodness. He sent his tee shot off into nowhere and smashed this woman’s cellphone which led to a quadruple bogey on the first hole.

Here’s a breakdown of that first hole:

A breakdown of @McIlroyRory's breakdown:

Quadruple Bogey on No. 1 at #TheOpen

It’s hard to claim that ANYONE had a worse start to their day than David Duval. He was -2 through 2 and probably felt that tingle of success on the back of his neck before completely imploding and having to write a ’13’ on his scorecard which is something most weekend warrior amateurs never even have to encounter.

But, Rory McIlroy is from Northern Ireland. This is basically his backyard. He’s the #3 ranked golfer in the world and came into this week 100% expecting to contend for another major. Then he has a quadruple bogey on the first hole and smashes some woman’s phone. So I’m leaning towards Rory McIlroy had the worst start.

What do you bros this?