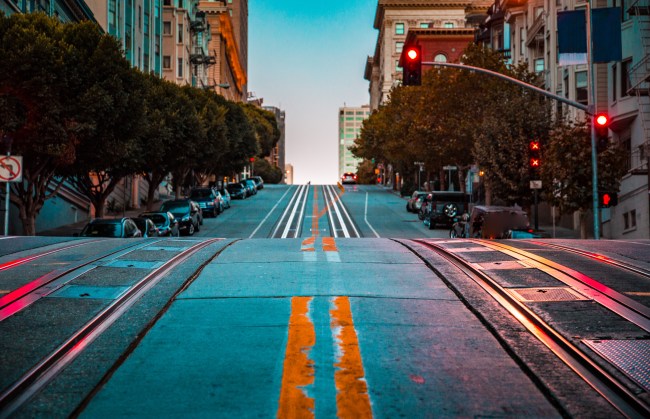 The annual Dolores Hill Bomb in San Francisco brings together skaters and cyclists who ‘bomb’ it down the infamously steep and dangerous Dolores Street between 21st and 18th street. With all of the restrictions on gatherings in place, it wasn’t clear if this year’s Dolores Hill Bomb would take place but a pretty massive crowd showed up last Thursday.

Some skaterboarders made it down intact. Others wiped out and ate asphalt. The crowd turned into a mob and swarmed an SUV that had mistakenly drove onto Dolores Street past some makeshift barriers to prevent road traffic and the angry crowd smashed at least one of the white SUV/station wagon’s windows in a moment that must have been beyond terrifying for the driver.

Why exactly did the angry crowd break the car’s window? That’s not clear. They had already swarmed the car and stopped it from driving into the event. This was probably some complete jerk in the crowd who was feeling the mob mentality at the moment but I don’t think we’ll have any answers on why the window was smashed.

We have some footage of the skaters bombing Dolores Street as well as the white SUV/station wagon being attacked. First up is the montage of the Dolores Hill Bomb with some brutal wipeouts, and below is the crowd smashing the car window. Be sure to check that out:

And here’s that unruly crowd swarming the white SUV with someone smashing a window as people cheer on as if the driver isn’t probably on the verge of a heart attack at that moment.

I think what’s bothering me the most about that mob attacking the car is that this wasn’t some nutjob trying to break up a protest and hurt people. It was a mob attacking a lost person. They tarnished the entire event by swarming that SUV and smashing a window instead of just making sure the car turned around safely.