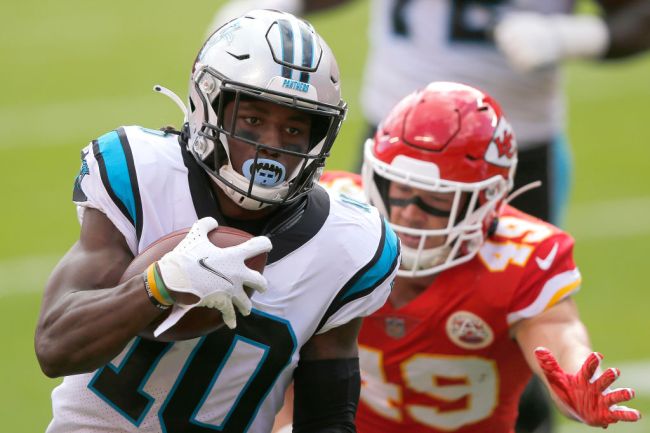 As Week 10 in the NFL approaches, we’re trying to make roster improvements as the fantasy playoffs are quickly approaching. Once again injuries to starters might have you in need to find replacements, but we also feature some guys that have put up some good performances recently and some fantasy relevant players that are coming back from injuries. Here are players you should look to add in Week 10.

David Johnson is in concussion protocol after leaving the game last week against Jacksonville. Duke came in and had a season-high 20 touches, rushing for 41 yards with a touchdown to go along with 32 receiving yards. If David is unable to go, Duke will get the start.

This is on the small chance the previous Mike Davis owner dropped him before the return of Christain McCaffery. The Grandpa Simpson walking in and out meme basically summarizes CMC’s 2020 season as he suffered a shoulder injury in his first game back from IR. We’ll find out more about his status, but if McCaffery will indeed miss some games, Mike Davis will take on the lead back role he excelled at.

I wasn’t sure about Samuel the last couple of weeks, he had a touchdown in two previous games, but his small role in the offense made him tough to add. That changed after last week as Samuel led the Panthers with 105 receiving yards and saw the end zone again. We’ve started to see D.J. Moore fade the last couple of weeks, Samuel could be moving into that number two option for Teddy Bridgewater.

Meyers has been on my radar since last year when Tom Brady said he was one of the best receivers in training camp. It’s taken some time and a different quarterback to get there, but Meyers is starting to show his talent. He has 18 receptions on 24 targets for 227 receiving yards in the last two games. Newton went to him for that last catch in the fourth quarter to put them in position for the winning field goal last week, it shows he has confidence in the second-year receiver.

I’ve mentioned McKissic previously as a running back with upside because of the usage in the passing game. McKissic led the team with 14 targets and nine catches as Alex Smith favored the check down a lot in last week’s loss to the Giants. Kyle Allen suffered a season-ending ankle injury that brings Alex Smith’s comeback story to its peak. Of his 49 passes this season, 18 of them have gone to McKissic.

When Justin Jackson exited early for the Chargers it was Ballage and not Joshua Kelley that was the more productive back. I don’t expect him to be more than a low-end RB2 if Jackson misses time, he is someone to consider in deeper leagues.

Amendola had his best outing last week with a season-high ten targets to go with 79 yards from scrimmage. If Kenny Golladay still can’t play due to a hip injury, Amendola can be considered a PPR flex option.

It’s looking like Golden Tate’s days in New York are done as he was a healthy scratch in Week 9 after complaining about his usage. The undrafted rookie took full advantage with four catches for 72 yards and could have had an even bigger day, but the catch that was originally called a touchdown was reversed after replay showed he was just short. Mack is someone to stash and watch and see if he can continue to have a role

Someone who might be available, there’s a good chance Lazard will return this week after missing a month and a half with a core injury. He will resume his position as the number two option behind Davante Adams and could be a viable flex option if he can match some of the previous production this year.

Tight ends are at a premium this season, it’s possible the person in your league dropped Hooper when he missed two games due to an emergency appendectomy. Before that, he started to find fantasy relevance with three straight double-digit PPR performances.