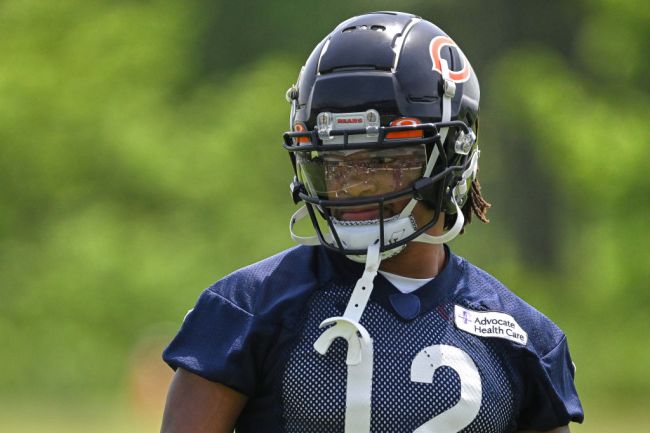 The Chicago Bears drafted a rookie this year who finds himself in a bit of a unique situation. Velus Jones Jr is 25 years old heading into his rookie season.

It’s a couple of years older than your average NFL rookie, but Jones Jr doesn’t seem too concerned he’s starting out his NFL career a bit later than would have been expected.

He talked to Adam Rank on “The Sick Podcast” and told Rank that his age doesn’t matter to him.

Chicago Bears’ wide receiver @VelusJr joins @adamrank to discuss what it was like to be drafted by the Bears, what to expect this season, his opinion on his teammates and much more!

‘People talk about it, but it don’t matter. I’m a baller at the end of the day. I know what I can do. Me being 25 years [old] is not going to stop me from running past people to score touchdowns and stuff like that. I’m going to be fast for a long time, strong for a long time and making plays for a long time. So, it’s really irrelevant.”

Jones Jr also pointed out that he has avoided major injuries throughout his career, which makes him feel like he may be a bit fresher than some other players that may be younger, but have taken some punishment throughout their careers.

“I never had any major injuries in college. Only thing I had was like a boxing fracture and a high ankle sprain. Never broke a bone, never had surgery in my life. So, honestly I have the body of like a 21 or 22 year old. Then some guys that have a lot of injuries in college and that you know are going to take punishment in the NFL, but I’m healthy as, like a baby horse. I’m healthy as all get out. That really is irrelevant, you know people gonna talk about it. I only can control what I can control, so they can just stay tuned on that.”

Velus Jones Jr has an opportunity to carve out a big role early with the Chicago Bears in a receiver room without too many established options and he could quickly get people to forget about his age if he capitalizes on that opportunity.