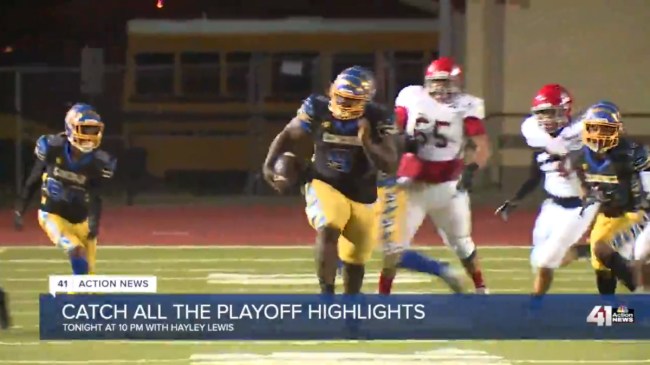 The story of the Lincoln College Preparatory Academy football team and its 6-foot-2, 310 pound quarterback Howard Brown is the stuff of movies.

In fact, there is actually a documentary filmmaker interested in working with them to tell that story.

Brown, who has already committed to Iowa State (to play on the defensive line), was so much bigger than his fellow Pop Warner players in middle school, he was forbidden from carrying the ball at one point.

That’s no longer a problem.

Now that he is in high school Brown gets to carry the ball, and throw the ball too – he’s passed for more than 3,000 yards passing in his high school career – as the Blue Tigers’ star quarterback.

But his running… that’s where Brown draws the most attention, and it’s easy to see why.

How do you stop Howard Brown of Lincoln Prep? Breaking ankles on a 27-yard run pic.twitter.com/bhrxfR4YKa

Iowa State QB commit Howard Brown is 310 pounds and runs like this. 😲

While he probably won’t be running or passing much for the Cyclones next season, Brown has already fulfilled on dream.

“If you could hear from any big fella out here, it’s a dream to run the ball,” said Brown. “I just feel like Lamar Jackson.”

Interestingly, the program started out very inauspiciously when coach William Lowe took over in 2017.

“I think for my first practice a kid showed up with no shirt and jeans on,” Lowe told USA Today. “The kids weren’t used to a good program because expectations were never set for them.”

However, Lowe built the program up and the Blue Tigers were even undefeated going into the playoffs in 2019 when Lincoln’s best player, running back Israel Gentry, was involved in a car accident, suffering a broken neck, spine, arm, shoulder blade and elbow, and rendering him a quadriplegic.

The team went out and won their playoff game 38-10 the next day.

“He told me to go get his helmet and pads,” Lowe said Gentry told him after he was able to communicate again.

Prior to that, in June of 2019, several members of the the Kansas City Chiefs visited Lincoln College Preparatory Academy, helped clean up the field and stands, and provided Lincoln with a $250,000 “Grassroots grant” to build a new football field.