This 3 Vs. 1 MMA Fight In Poland Went As Horribly As You Would Expect And Ended In A Brutal Beatdown 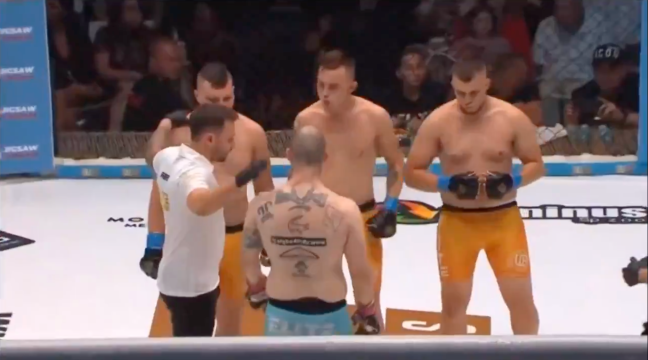 When three fighters take on one fighter, it is not going to end well for the solo side. Most people can see the result coming from a mile away.

That prediction came true in brutal fashion on Saturday at an Elite Fighters event in Rzeszow, Poland. A single fighter that goes by ‘Kung Fu Panda’ took on a trio of vicious opponents— Milosz ‘Modlicha’ Wlodkowski, Maciej ‘Szwechu’ Szwech and Norbert ‘Neted’ Grazka.

I could not find any information as to how much training any of the fighters may have had, or why the 3-on-1 event was even a thing to begin with. Nevertheless, it was over before it began and everyone, even the referee, knew what was coming.

This ref wondering where everything went wrong in his life pic.twitter.com/5mL8TMElno

Once the fight finally got underway, it went exactly how you think. It was a beatdown from the first bell and lasted less than 30 seconds.

Kung Fu Panda was immediately taken down and never got back up.

While one of the three opponents held Kung Fu Panda in a grappling position, the other two threw haymaker hammerfists to his head. It got ugly quick and the referee made the stoppage everyone predicted.

Kung Fu Panda’s pummeling was not the first three-on-one fight. In a video that went viral from Russia last year, the brawl brought a very different result. The “one” won.

Nevertheless, the entire idea for a three-on-one fight is a horrible idea to begin with and doesn’t need to be replicated again.