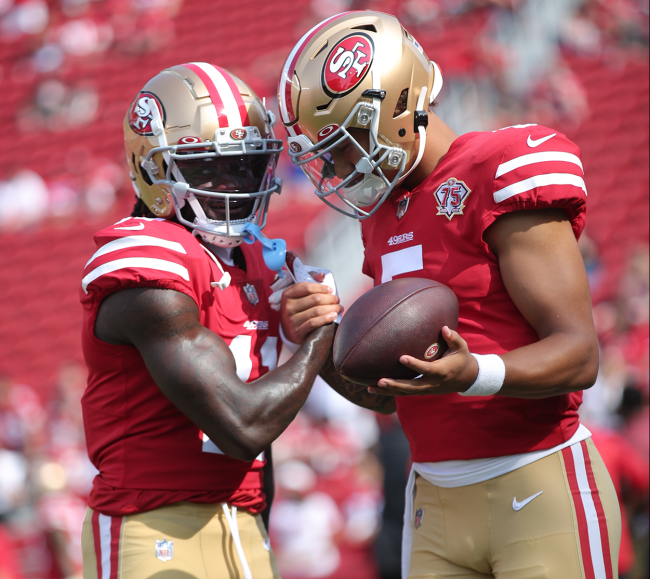 Trey Lance is entering his second season in the NFL and is expected to be the starting quarterback for the San Francisco 49ers. As rumors continue to swirl around the former No. 3 overall pick continue to swirl, Brandon Aiyuk is standing up for his signal-caller in hilarious fashion.

Earlier this month, a concerning report surfaced about Lance on Colin Cowherd’s podcast. Cowherd and NFL insider Mike Silver reported that they have inside sources who are worried about the former North Dakota State quarterback and that is why the team is yet to trade Jimmy Garoppolo.

Specifically, they both said that Lance is dealing with “arm fatigue.”

“…they’re rebuilding his delivery, and he gets arm fatigue,” Cowherd said. “It’s not an easy throw. He needs days off.”

Silver said that he had heard similar things.

“The arm fatigue is a really interesting thing, and I have heard that, too,” he said.

In response to the dual report, a member of San Francisco’s coaching staff shot it down.

Late on Tuesday night, Aiyuk posted a video of his offseason workout with Lance. The video only included three throws, which was intentional.

The caption reads: “The only three throws from the day, his arm got fatigued after that…”

In response to Aiyuk’s post, current and former NFL players chimed in.

Aiyuk’s caption was a not-at-all subtle jab at Cowherd and Silver. It will be interesting to see if they are right, but it seems like their report has received a lot of pushback from within the organization.