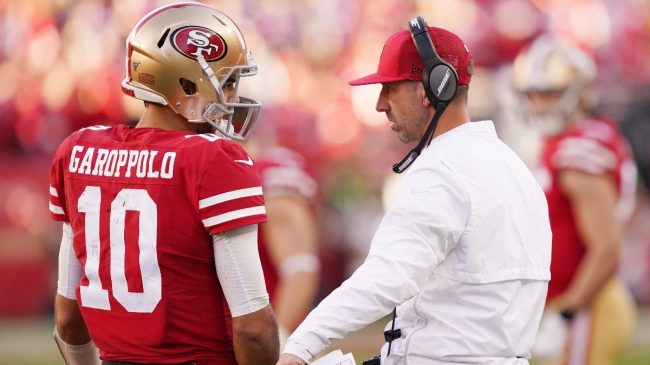 The Dallas Cowboys are in a tough spot right now after Dak Prescott fell to injury. He’s ruled out for several weeks, putting their season in jeopardy. For that reason, many have speculated a possible trade with the San Francisco 49ers for quarterback Jimmy Garoppolo. Head coach Kyle Shanahan responds to the rumors.

According to Jon Machota, Shanahan hasn’t completely closed the door on trading Jimmy Garoppolo. In fact, it sounds like the 49ers’ head coach is keeping an open mind about a possible trade with the Cowboys. “Just like al players, we’ll listen to anybody on anything. That never changes for any player or coach. We’ll always listen to anybody.”

49ers coach Kyle Shanahan was asked if Dak Prescott’s injury opens up the possibility of trade talks with the Cowboys for Jimmy Garoppolo: “Just like all players, we’ll listen to anybody on anything. That never changes for any player or coach. We’ll always listen to anybody.”

Shanahan’s response is rather vague, but that’s the best approach to take in discussions such as these. The 49ers don’t want to completely show their cards, but if the Cowboys come crawling for a new quarterback, then San Francisco will at least listen to trade offers.

Jimmy Garoppolo was rumored to be traded throughout the entire offseason. Instead, he ended up reconstructing his contract to remain as the backup quarterback. The 49ers have officially moved on to Trey Lance, but it’s still up in the air whether he’s the man for the job or not. Kyle Shanahan may consider keeping Garoppolo for now as a strong backup option in case things go south with Lance this season.

As for the Cowboys, they may opt to trade for a quarterback to fill in for Dak Prescott. If not, then we should expect to see Cooper Rush takeover until Prescott returns. Keep an eye on this quarterback situation, as the front office could pull the trigger to trade for Jimmy Garoppolo with the 49ers. If that’s the case, then Dallas could remain in the playoff hunt for the time being.