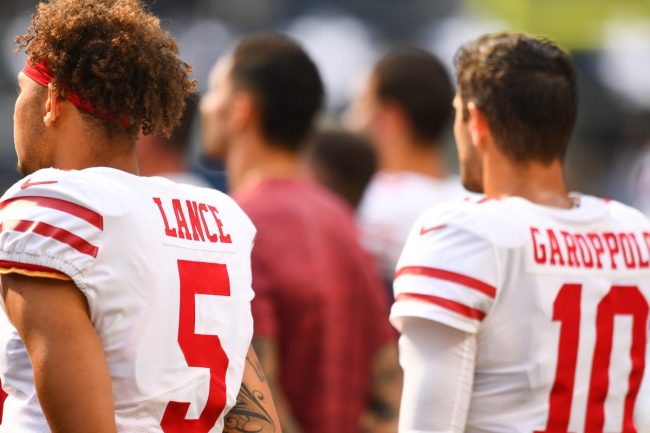 Trey Lance was reportedly “annoyed” at the 49ers’ decision to bring back last year’s starting signal caller Jimmy Garoppolo. The report stems from a statement made by NFL analyst Albert Breer.

Breer states that Lance was not initially happy to see Jimmy G return to the roster after sitting behind him all of last season. A season in which the team was a game away from a Super Bowl appearance.

“While I’d heard [Trey] Lance was a little annoyed in the immediate aftermath [of Jimmy G restructuring], he’s a smart, mature kid who I believe can handle it. Truth is, if he couldn’t, you might have bigger questions about where the 49ers are at the position.”

Lance’s response is far from extreme. In fact, it’s typical. The 49ers said that they’d agreed to move forward with their former first-round draft pick, handing him the keys to the offense. There were multiple reports of a Garoppolo trade, but they never came to fruition.

When the offseason ended, the front office restructured Garoppolo’s deal to bring him back to the Bay. That’s certainly a hit to the presumed confidence that the franchise had instilled in Lance. It’s also something that could linger as the season progresses. Rather than knowing that he’s the guy, the youngster could constantly be looking over his shoulder at a seasoned veteran.

While Breer backed off of his original statement, it doesn’t mitigate the tensions that could be looming in the QB room.

Yeah, full disclosure, my wording might've been a little presumptive there. I'm not climbing in the guy's head. What I heard was it was complicated news to take, as you'd expect it would be, and again that was just in the immediate aftermath.

It also begs the question, “Do the 49ers really trust Lance to lead the offense?”

Some around the NFL don’t believe so. Peter King recently wrote that he thinks Lance will be benched midseason. Garoppolo has experience playing with this team, and he’s obviously shown the ability to put them in positions to win. If Lance can’t do the same, both fans and teammates might call for his replacement. And if he’s benched, it will be hard to win him back.

“I do not want to be a negative Nate here. I truly do not dislike the San Francisco agreement to bring back Jimmy Garoppolo… I wonder one thing: This is a veteran team that went to battle with Jimmy Garoppolo late last season and saw him beat the Rams in Week 18, then watch him be the QB in winning playoff games at Dallas and Green Bay. How will George Kittle and Fred Warner and Arik Armstead and Deebo Samuel, all good team guys, react privately if Trey Lance struggles the first month of the season?”

Things could soon get dicey in San Francisco by the decision to bring Garoppolo back. While the team is hoping that Lance will excel under center, they could all but lose their former top pick if he struggles.