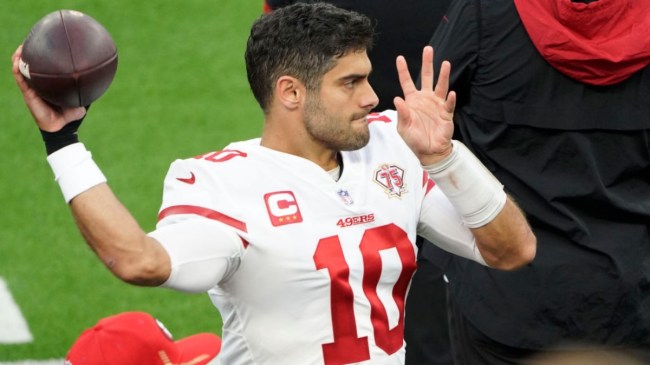 For the entire NFL offseason, football fans have been expecting to see the San Francisco 49ers trade Jimmy Garoppolo. That expectation carried right up to the moment that the 9ers surprised everybody and reworked Jimmy G’s contract.

The 49ers’ front office and coaching staff has spent plenty of time discussing Garoppolo and this situation, but fans hadn’t heard much from Garoppolo since the end of last season. That changed today as he discussed signing the new deal with the media today.

Me, I’m happy with where I’m at. Happy to be with the Niners. I think the Niners are happy to have me back. I think things are working out pretty well.

Garoppolo also discussed the shoulder injury that required surgery this offseason and held up trade talks for him.

It actually turned out the other way. The thumb wasn’t as serious as the shoulder was. … [The thumb] really took care of itself, didn’t need surgery or anything like that, so that was nice. But the shoulder, I really don’t like to get surgery if I don’t have to, so I was really in the thought of, ‘I could rehab this thing. I played three or four games on it. Whatever. I think I can get through this.’

After about three, four weeks of that, it wasn’t happening; it wasn’t working. We were like, ‘Alright, we’ve got to get the surgery.’ That’s when we made that choice, and I’m happy the way it worked out. I don’t think it was the exact way I wanted it to work out, but everything happens for a reason.

Garoppolo is healthy now and he’ll spend the year waiting for an opportunity to once again be a starting QB in the NFL.