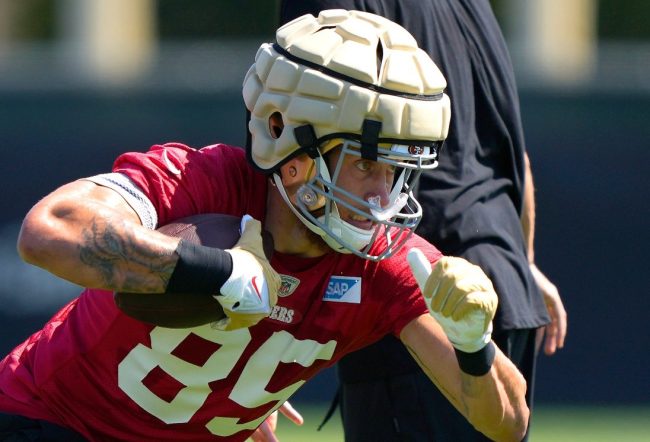 The San Francisco 49ers are currently in a joint practice with the Minnesota Vikings before taking them on in their second preseason game of the year. Star tight end Geroge Kittle was asked a ton of questions about practicing with Minnesota. His answer was truly hilarious, as his answer involves teammate Nick Bosa.

According to David Lombardi, Kittle’s favorite part about joint practices is that he doesn’t have to block Nick Bosa. Who can blame him? Bosa has been one of the best pass rushers since joining the league in 2019. Even though George Kittle is one of the best blocking tight ends in the league, even he needs a break every so often.

George Kittle on joint practices with the Vikings: "I love not blocking Nick Bosa. It's awesome."

Although he makes this claim, it’s not like the Vikings don’t have a talented group of pass rushers themselves. Regardless, George Kittle is just happy to face off against someone else as the 49ers prepare for their next preseason matchup. At the end of the day though, Kittle and Bosa squaring up in drills have definitely made them better players. This gives San Francisco the best team possible with the 2022 season around the corner.

With that in mind, the 49ers are in a great spot to maintain relevancy in the NFL. Most of the attention is focused on Trey Lance, but luckily for him, the roster is completely loaded around him. George Kittle will thrive in blocking yet again, largely due to facing off against Nick Bosa. However, this joint practice is definitely giving the star-tight end a little break that he’s enjoying.