NFL QBS BEWARE: 49ers DT Javon Kinlaw Is Shredded, Looks Like The Hulk And Is Coming For Blood 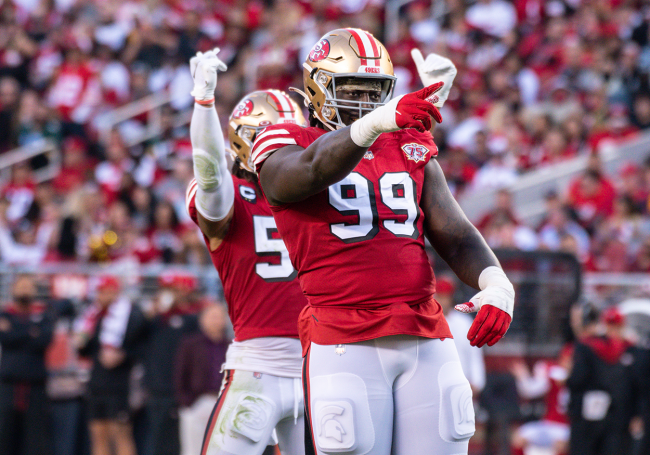 49ers defensive tackle Javon Kinlaw is poised for a breakout season during his third year in the NFL. The 24-year-old is turning heads in training camp not only for his play but his sheer, monstrous size and absolutely jacked physique.

Over the course of his first two years in the league, the former No. 14 overall pick has recorded 41 tackles with 1.5 sacks in 18 games with 16 starts. Kinlaw’s rookie season was strong but he had his second season cut short due to injury after just four games.

He spent the offseason rehabbing his knee and is back stronger than ever. Literally.

Kinlaw is listed at 6-foot-5, 319 pounds and is built like a boulder. The former First-Team All-SEC player does not have an ounce of fat on his body— he’s all muscle.

It’s actually frightening how strong that he is.

Kinlaw has been seeing increased reps during San Francisco’s joint practice with Minnesota this week and one play in particular is turning heads both in the locker room and around the league. He looks like a monster.

“I think the brings an intimidation factor for sure,” Bosa said. “He has everything you could possibly need to be super dominant in this league, he just needs some reps to get used to it and I’m just excited he is feeling good.”

This is the year of Javon Kinlaw. Opposing quarterbacks beware.