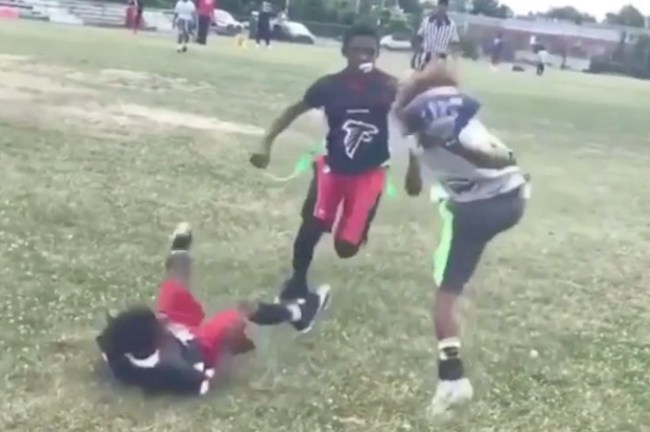 Back in 2014, Odell Beckham Jr. made one of the greatest one-handed catches in NFL history against the Dallas Cowboys. It was the 2nd quarter and the Giants were beating Dallas 7-3 at Met Life Stadium when OBJ pulled in the one-handed catch as he hurled his body into the end zone (video below).

I want to make this comparison not because there was anything riding on this 9-year-old’s one-handed catch but because at this moment that kid 100000% felt like he was OBJ. It’s like a junior golfer sidling up to a putt on the 18th green and telling himself that putt’s to win the U.S. Open. It’s like a kid playing roller hockey and telling himself the next goal was to win the Stanley Cup. It doesn’t matter whether or not this 9-year-old’s spectacular one-handed catch was to win the game because it felt that way for him:

As a youth football coaching legend, I’m sending my bagman out to wherever this kid is located along with my cousin the workers comp attorney, who can alter the residency papers. Can you imagine what this kid could do in my offense? from user @3YearLetterman and you’ve got tons of comments from players talking about ‘push off’ and asking how many rings this kid has. It’s amazing that Twitter remains a free website with all that entertainment (find me on Twitter at @casspa btw).

By the way, here’s that OBJ one-handed catch against the Cowboys from a few years back if you want to watch it again: