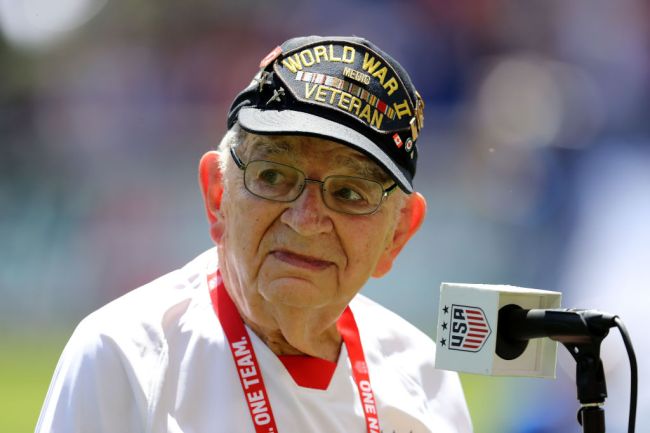 98-year-old Pete Dupré is better known as “Harmonica Pete.” He is a World War II veteran and loves his country more than life itself. Literally.

Dupré says that he doesn’t know the trick to his longevity, but his doctors have told him that playing the harmonica has helped to strengthen his lungs. He often plays the national anthem before sporting events and it is a delight.

His rendition will give you chills and it comes on July 4th (observed) on the fifth.

The first time that he played at a U.S. Women’s National Team game was in 2019.

He did it virtually during COVID-19 and has not performed at a sporting event since the pandemic. It has been a particularly long year for Dupré especially.

Before that, he played for the Knicks and the Vikings, among others. Dupré was visibly excited to play the anthem on 4th of July weekend and put his heart into it.

The entire performance lasted two minutes and 13 seconds. To put that in perspective, the over/under for the last three Super Bowl anthems were all under two minutes. He saw his moment and seized it.

Dupré sparked a 4-0 win over Mexico that was completely dominant. It would have been 5-0 but for a bad offside call. There was no VAR for the Olympic tune-up match.

All four goals came in the first half.

Feast your eyes on this first half 🔥#SendOffSeries x @Visa pic.twitter.com/fF420tkl2Q

The USWNT will begin the Olympics on July 21.