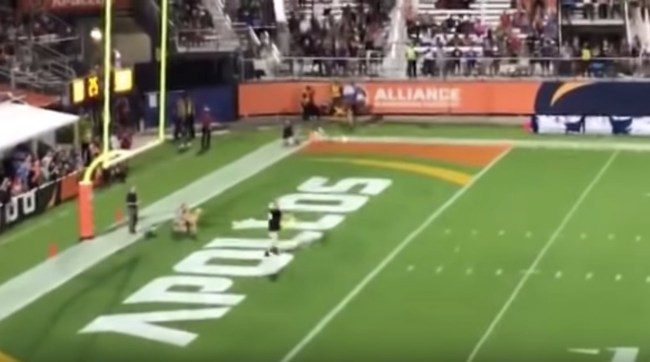 The AAF had its third week of games last weekend. The Orlando Apollos beat the Memphis Express on Saturday 21-17. The Salt Lake Stallions also bested the Arizona Hotshots 23-15. I actually watched about half of the Orlando game on Saturday night because there weren’t any other good games on TV worth watching but it legitimately felt like watching a non-Power-5 conference college football game.

There were two more games on Sunday, Birmingham vs Atlanta and San Diego vs San Antonio, but none of the action or highlights compared to the Saturday night moment in Orlando where a dog caught an 83-yard frisbee pass.

According to this tweet, the stadium’s announcer claimed this 83-yard frisbee catch from the dog is a world record and I honestly don’t even know where I’d start trying to verify that claim. I’d think maybe the Guinness Book of World Records but I don’t even know where to find a record like that in there. Regardless, this is a crazy impressive feat:

It says a lot about the AAF through 3 weeks that the most exciting highlight thus far is a dog catching an 83-yard frisbee pass. With that said, I still watched most of the game on Saturday night so I guess the AAF even in its current form is more engaging than Saturday night college basketball or small market NHL games.