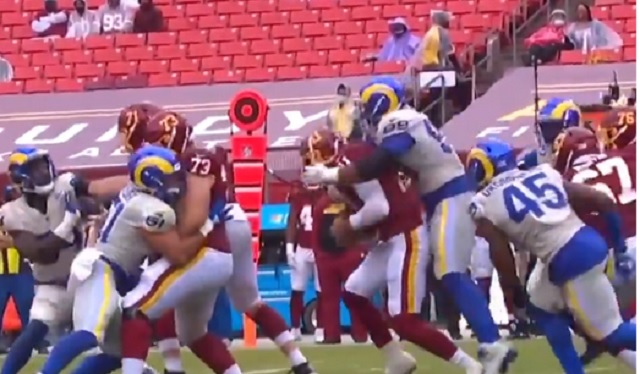 Alex Smith made his long-awaited return on Sunday after sitting out two years following a devastating injury and his leg is being tested against none other than defensive juggernaut Aaron Donald.

In Smith’s first series back on the field, he was welcomed back by Donald who jumped on his back during a sack.

Smith sacked for the 1st time too. Aaron Donald gets the better of Wes Martin, jumps on Smith's back, brings him down. Smith got up ok. pic.twitter.com/7GxPBsRPyt

After the play, Donald could be seen yelling “that motherf*cker’s leg is strong’ while on the bench.

“That motherfucking leg is strong!” pic.twitter.com/fzo5VUaTMb

Gonna be a long day for Smith behind center against Donald, hopefully, his leg makes it through the day intact.