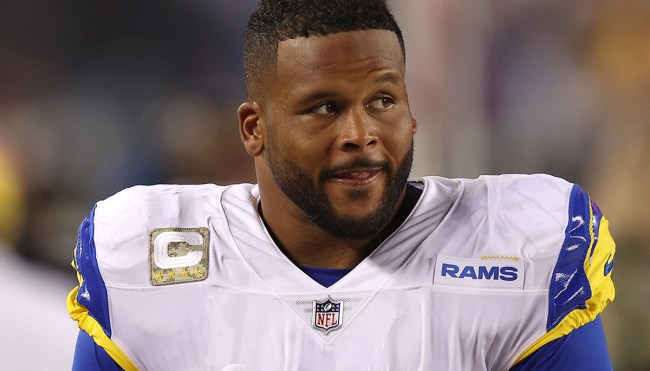 Even Aaron Donald’s biggest haters have to agree he’s one of the most talented defensive linemen to ever step onto the gridiron—just like his biggest supporters would be foolish to refuse to acknowledge he’s routinely deployed some very questionable tactics while cementing his status as an all-time player.

Donald has been fined more than $175,000 over the course of his eight years in the NFL thanks to eleven different incidents the league determined were worthy of disciplinary action.

That includes three different occasions where he wrapped his hand around the neck of another player: the first occurred in 2016, and he returned with a vengeance last season by choking Lucas Patrick during a showdown with the Packers in November before attempting to give D.J. Humphries the same treatment less than two months later.

Aaron Donald choking a player with “stop hate” on the back of his helmet lmaooooo pic.twitter.com/mtBXrYAx5t

Thanks to his pattern of behavior, the jokes basically wrote themselves when Donald was seemingly captured practicing his choking technique at training camp last week with some help from rookie tackle Elijah Garcia, the unfortunate soul who found himself on the receiving end of the drill.

This does not look like a fun drill for # 69 lmao pic.twitter.com/TTlGTnJ0EZ

Plenty of fans accused Donald of crossing the line and subjecting the first-year player to the hazing rituals that have increasingly fallen out of favor in recent years. Now, Donald has chimed in to try to clear the air while chatting with Brandon Marshall on the most recent installment of I Am Athlete (the segment in question kicks off at around the 1:40 mark).

Here’s what he had to say in his defense via Bleacher Report: