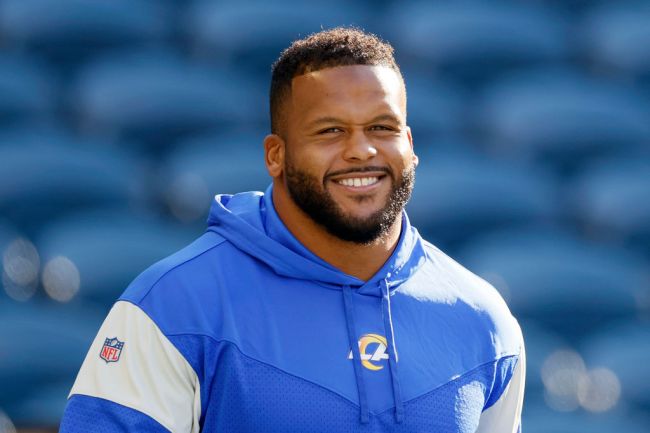 The Los Angeles Rams welcome the Detroit Lions to town on Sunday for what will be Jared Goff and Matthew Stafford’s first game against their former teams. While the Stafford – Goff storyline will be key come Sunday, Los Angeles’ Aaron Donald is looking forward to seeing his former team’s quarterback as well.

Donald has been able to get his hands on just about every quarterback in the NFL at this point, except Goff, but he’s looking to change that come Sunday. He let Goff know it, too, by sending him a message saying that he’s coming after him.

“It ain’t going to be weird at all,” Donald said Thursday, according to Gary Klein of the L.A. Times. “I told him, ‘Get ready.’ I told him I’m going to be coming after him, so he knows what it is.

“I’m going to go out there, fly around try to make my plays when they present themselves. Hopefully, I get to him a couple times.”

Goff will certainly be keeping his eyes out for Goff throughout the game. He got to witness just how talented he is at getting to the quarterback for multiple seasons, and now, unfortunately for him, he’s that QB that Donald is trying to slam to the turf.

It could be a long day for the Lions on Sunday as they’re the league’s only winless team at 0-6. Meanwhile, the Rams have looked great this season with a record of 5-1. Stafford and Donald will be looking to earn a comfortable win over their former club.