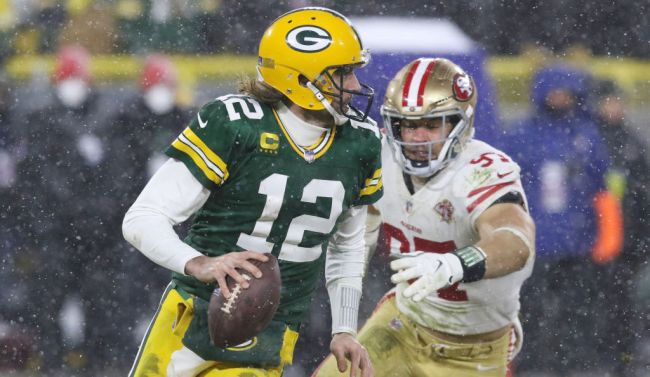 Two years ago, following a 37-20 loss in the NFC Championship game to the San Francisco 49ers, Green Bay Packers quarterback Aaron Rodgers expressed how much he wished the game was played at Lambeau Field.

Well, because the internet never forgets, those comments have resurfaced following the Packers’ 13-10 loss to the Niners over the weekend and it makes the defeat look all the worse.

“I’ve said this before: we’ve got to get one of these at home,” Rodgers said to reporters following the 2019 NFC Championship game. “It’s a different ball game playing in 20-degree weather, snow, cold, and wind. It’s a different type of game than playing here.”

Aaron Rodgers 2 years ago after the losing to the 49ers in the NFC Championship game… did not age well. pic.twitter.com/VfHzLCWkMc

With his loss in the NFC Divisional Round matchup on Saturday, Rodgers is now 0-4 against the San Francisco 49ers in the postseason.

Thanks to their victory over the Packers, the San Francisco 49ers will now travel to Los Angeles to take on the Rams in the NFC Championship game, marking the third meeting between the NFC West rivals this season.

The winners of Sunday’s championship games will meet at Super Bowl LVI as So-Fi Stadium in California on Sunday, February 13, 2022. The Kansas City Chiefs are currently the favorites to win the title, followed the by Los Angeles Rams, San Francisco 49ers, and Cincinnati Bengals.

Over in the AFC side of the bracket, Patrick Mahomes and the two-time defending AFC Champion Kansas City Chiefs will be hosting young gunslinger Joe Burrow and the Cincinnati Bengals in the AFC Championship game.

RELATED: ‘Aaron Fraudgers’ And ‘Throw Rogan’ Trend On Social Media After The Green Bay Packers Were Eliminated From The Playoffs