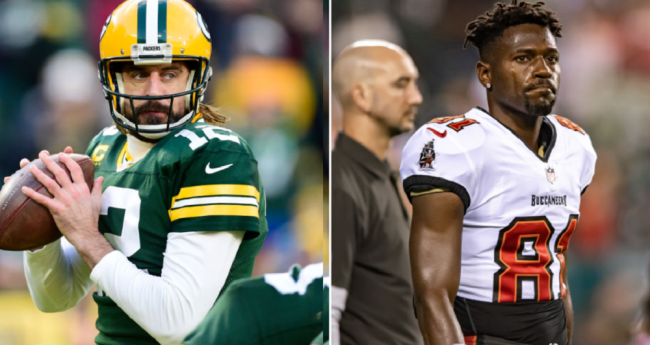 On Thursday, the NFL announced they were suspending Brown for three games weeks after his former personal chef accused him of obtaining a fake vaccine card to bypass the league’s protocols.

#Bucs WR Antonio Brown and Mike Edwards have each been suspended without pay for the next three games for misrepresenting their vaccination status under the NFL-NFLPA COVID-19 Protocol. They have accepted the discipline and waived their right of appeal.

While Rodgers misrepresented his vaccination status to the media, the NFL knew that he was unvaccinated.

Just to be clear: There is an enormous difference between what Aaron Rodgers did and what Antonio Brown did.

Brown actually used a fake vaccine card and *everyone* thought he was vaccinated.

Rodgers misled the media, but the NFL, the Packers & his teammates all knew his status.

Despite that, fans still believe Rodgers should have faced harsher punishment for knowingly violating Covid protocols. After Brown’s suspension was announced, “But Aaron Rodgers” began trending on social media as fans called the NFL hypocrites over their latest decision.

Interesting that Aaron Rodgers gets a pass……. https://t.co/HiOkV4TDHd

But Aaron Rodgers only gets a slap on the wrist with a fine. NFL is such a joke. https://t.co/p8vA4VIU0n

How many games did Aaron Rodgers get? https://t.co/lCjVWYj8ZM

Good, but Aaron Rodgers should have faced stiffer discipline for lying about it (even if he tried to get the league to accept his wackadoodle 'immunity program') https://t.co/MMQCDFOaQ1

So the black athletes get suspended 3 games for misrepresenting vaccination status but Aaron Rodgers got a slap on the wrist? Make it make sense NFL 🤔

HAHAHAHAHA AND RODGERS GOT NOTHING!!! I never want to hear another Packers fan coming about a ref ever again https://t.co/lSFk1frZvm