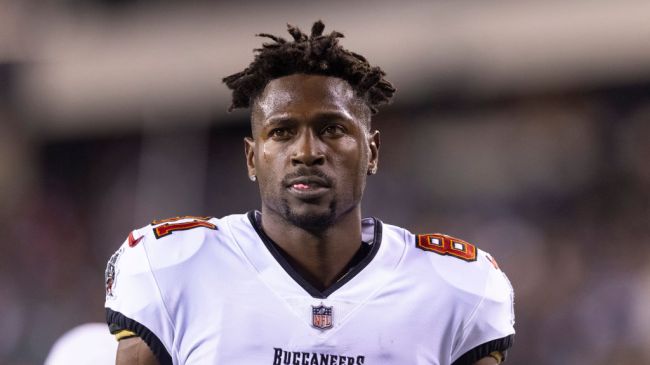 Antonio Brown has once again found himself in the news for the wrong reasons.

On Thursday, the Tampa Bay Times reported that Brown was being accused by his former live-in chef Steven Ruiz of purchasing a fake vaccine card to circumvent NFL covid protocols.

According to Ruiz, Brown’s girlfriend texted him on behalf of the Bucs’ wide receiver and offered to pay him $500 for a fake Johnson and Johnson vaccine card.

Ruiz says Brown later showed him cards that Brown said he bought for himself and Moreau: https://t.co/xZ67kjqgYR pic.twitter.com/3Kmo3PQn08

Ruiz says he was unable to find a fake vaccine card but noticed that Brown had obtained one and sent it to the Bucs as proof that he had been vaccinated.

To document COVID vaccinations quickly, the Bucs would sometimes have Guerrero and others photograph the vaccine cards to send to the head trainer and eventually to their infection control officer for verification.

The wide receiver and his personal chef fell out over an uncollected debt. Ruiz, who owns Taste That LA, says he is owed $10,000. He spoke publicly for the first time about Brown after trying unsuccessfully to extract a settlement from the Super Bowl champion Bucs and after talks with Brown’s lawyer went nowhere.

Ruiz said he was unable back in July to find a fake vaccination card for Brown, who had told those around him that he was worried about the vaccine’s potential negative effects on his body. A few weeks later, however, Ruiz said Brown showed him fake vaccination cards, which the wide receiver told Ruiz he had purchased for himself and Moreau. They were sitting on Brown’s dining room table, Ruiz said. It was just days before the start of Bucs training camp.

Alex Guerrero, a personal trainer, and co-founder of TB12 with Tom Brady, arrived at Brown’s house the same night to help the 33-year-old Pro Bowler recover from knee surgery. According to Ruiz, Guerrero took a photograph of Brown’s vaccination card while he was there.
To document the list of vaccinated players as quickly as possible, the Bucs would sometimes have Guerrero or others in the organization photograph the cards to send to head trainer Bobby Slater and eventually to their infection control officer.
Ruiz said he believes Guerrero was unaware the card was fake.

Ruiz is currently suing Brown over a $10k debt he claims the NFL wide receiver owes him.

Brown and Ruiz fell out over an uncollected debt. Ruiz says he's owed $10,000.

Ruiz spoke publicly for the first time, to @NFLSTROUD, about Brown + the fake cards after trying unsuccessfully to extract a settlement with the Bucs and after talks with Brown’s lawyer went nowhere.