Aaron Rodgers Talks Packers’ Ayahuasca Celebration, Says He’ll Do It Again If It ‘Calls’ To Him 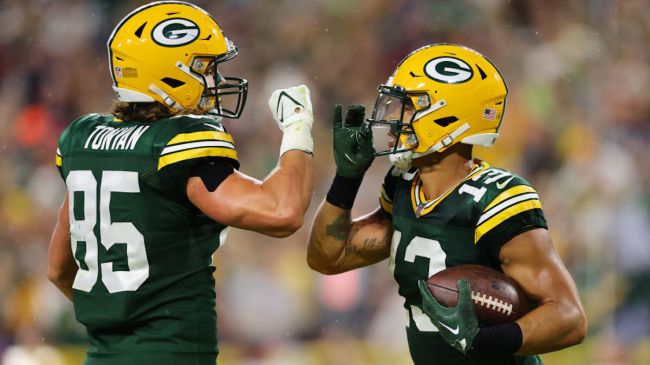 During his weekly appearance on The Pat McAfee Show, Green Bay Packers quarterback Aaron Rodgers — fresh off of a 27-10 win over the Chicago Bears — discussed the ayahuasca celebration that some of his teammates did during the game.

Rodgers said he and Lazard talked about having their own celebration a couple years ago. But on Friday, Rodgers said, “Allen kind of spread that to the rest of the guys so I was aware they were doing something.” And when he saw what they were doing on Sunday Rodgers “just wanted to get over there and get involved.” [USA Today via The Pat McAfee Show]

Rodgers, who once again insisted that the substance is “not a drug” —  “It has properties in it that have hallucinogenic abilities. But it’s not a drug. We’re talking about plants here,” Rodgers proclaimed — also said that he would take ayahuasca again if he was “called” to do so.

“Once you sat with the medicine one time you kind of know what that feeling is that more lessons to be learned. … Some people sit 100 straight days and still feel called years and years down the road to keep on doing it. I had such a beautiful experience I’m pretty certain it won’t be my last.”

"Ayahuasca isn't a drug it's a plant & I think that's a very important point to make" ~@AaronRodgers12#PMSLive #ART pic.twitter.com/xJyCiiP3Kn

Imagine telling someone 3ish years ago that Aaron Rodgers would be openly talking about hallucinogens “calling” to him. What a strange world we live in. Or simulation. Who even knows at this point? Or cares.

During Week 2 against the lowly Chicago Bears, Rodgers — the two-time-defending league MVP — completed 19 of 25 passes for 234 yards and two touchdowns. Following their first win of the year over the Chicago Bears, the Packers will host Bill Belichick and the New England Patriots on Sunday.